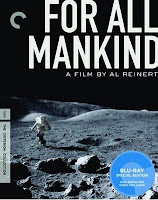 I'm still infatuated with HDTV, Blu-Ray, and streaming high quality movies over the internet. I'm not planning to buy a lot of Blu-Ray discs since there is so much content available on cable and online (not to mention a lot of DVD's I own that now look substantially better). But I did want to have a few "demo discs" including a couple of space-related ones.

One that I bought was "For All Mankind," a 1989 theatrical-release documentary that collects many of the best segments of NASA film from the Apollo era into a single "meta-moon-mission." As director Al Reinert explains in the making-of feature, all the Apollo missions pretty much followed the same script, so why not use the best film from each mission? He even went as far as to use some Gemini footage (mainly Ed White's EVA) because it was just gorgeous, in part because the Gemini missions' earth orbits were much higher than the Apollo, shuttle, or ISS orbits, so you could get a much better sense of the roundness of our planet. He also used some of NASA's "engineering film" including the famous shot of Saturn V stage separation shot from the separating boosters. Since these were film cameras, the film had to be recovered, which was quite a trick. Each camera would eject its film canister housed in a small re-entry vehicle equipped with parachutes and a radio homing beacon. On-station USAF C-130's with special aerial recovery equipment would home on these beacons and snatch the parachutes from the air (a technique that had been developed to recover Corona "spy satellite" film in the early 60's). The narration consists mainly of comments by the Apollo astronauts, recorded by Reinert in audio-only interviews. The Blu-Ray transfer is awesome - it was probably 16 mm film in most cases,  but the quality is quite impressive, especially in the scenes of lunar rendezvous with the LM silhouetted against the lunar surface.

I also watched the new Blu-Ray copy of 2001: A Space Odyssey, much of it with the audio commentary by actors Keir Dullea and Gary Lockwood. The film-like quality of the 1080p display is gorgeous and highlights Kubrick's great attention to detail in every aspect of this film. The spacecraft models are amazing. Dullea did some of his own stunts in this film, and he talks about one scene that was just wild, entering the emergency hatch when HAL famously refuses to open the pod-bay doors (here's a three-minute clip of the scene). In his haste to try to save "Frank," "Dave" had forgotten his helmet and gloves, making an EVA into the emergency airlock just a bit dicey.

The pod's door and outer airlock door were on the ceiling of a two-story set, with Dullea falling toward the camera positioned on the inner airlock door (on the floor) when he was supposedly ejected from the pod by pressurized air (this was why a stunt double wasn't used - his face was rushing towards the camera). He was suspended by a heavy rope, the other end of which was handled by a circus trapeze performer who weighed more than Dullea (a critical point). There were knots in the rope to signal the stopping points, and when the first knot reached him, the circus guy stopped the rope (preventing Dullea's face from impacting the camera) and then jumped off a platform with the rope attached to his foot, using his weight to suddenly yank Dullea back toward the outer airlock door (and ceiling of the set!) where he could use the emergency airlock close handle. It was done in one take, and it really looks like this takes place in zero-G. Dullea must have had total faith in Kubrick and that circus performer! An amazing scene in an amazing movie.
Posted by FlyingSinger at 12:50 PM