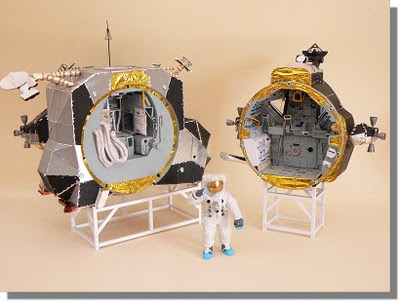 The moon landings were not faked, but if they were, this guy could have been one of the model builders. OK, maybe not (he says he was only 10 in 1968, and he's French), but he has built some pretty nice space models. I don't know exactly how I found his site, but it's got some pretty amazing stuff. I was an avid model builder in my youth (from maybe age 8 to 15), focused mainly on military aircraft, though I did build a few space models too (long since gone - I remember an especially nice Saturn V and a very large Gemini, possibly the original version of this Revell 1/24 scale model). I was pretty good for a kid modeler, though I didn't have the patience to do really fine painting or to custom-build special details. I pretty much built and painted according to the instructions. 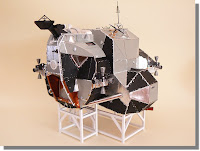 I haven't looked at all the models on M. Meens' web site, but my favorite has to be his recently completed 1/24 scale model of the Lunar Module ascent stage shown above and at left. This thing is a work of art - just beautiful. He has quite a few photos showing the fine detail, but my favorite is the cutaway view shown above. I have seen many illustrations and 3D representations of the LM over the years, including the real full-size one (exterior view only, below right) at the National Air & Space Museum in Washington. 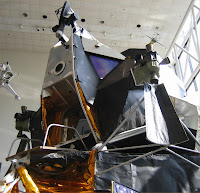 I've also seen life size cutaway mock-ups of the LM flight deck (at KSC and other places) and I've spent hours in the the 3D virtual cockpit of the AMSO LM in Orbiter (flying simulated moon landings, of course). But this two-section view of this 1/24 scale model gives the best impression I've ever felt of the nature and size of the tiny LM cockpit. Very cool. 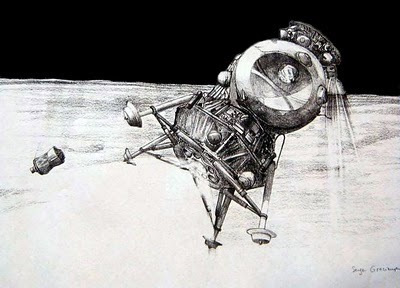 The web site also includes some models and drawings of the Soviet N1-L3 moon rocket (which failed in all tests). The models (N1 vs. Saturn V) are great and at one time were on display at Cite de l'Espace in Toulouse, which I recently visited (I didn't see them). In addition, there is a beautifully drawn (by Serge Gracieux of Cite de l'Espace) set of "story board" images depicting what the Soviet N1-L3 moon landing mission would have been like if it had succeeded in 1969. The mission had some similarities to Apollo, but only cosmonaut would have landed the "LK" on the moon (shown above), while one other would have remained in lunar orbit until the ascent section of the lander rendezvoused for return to Earth. There were no docking ports planned, so the landing cosmonaut would have to transfer to and from the LK by EVA.

UPDATE: This video is from a Japanese modeler who did a superb customized job building a 1965 Revell 1/24 scale Gemini Spacecraft (the one I had back in the 60's). The video starts with some space scenes with the Apollo 8 transmission of Genesis (December 1968), and a series of stills showing the model building procedure starts around 0:34. The gold foil on the back end of equipment module (from a candy bar wrapper!) is an especially nice touch. Finished model shown below. Very impressive. 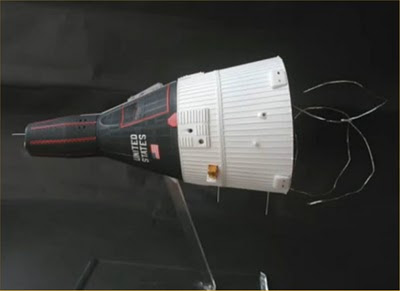 Posted by FlyingSinger at 10:08 PM