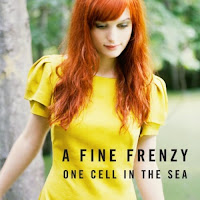 The other discovery is a singer-songwriter who calls herself A Fine Frenzy (actually Alison Sudol). She writes gorgeous melodies, and her lyrics and voice are nice too. "One Cell in the Sea" (2007) and "Bomb in a Birdcage" (2009) are both very good albums. She's something like 22 years old.
Posted by FlyingSinger at 3:50 PM