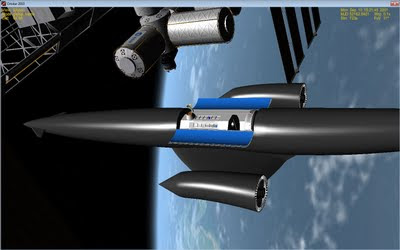 So Wikipedia tells me that the Reaction Engines Skylon proposal has been around for a very long time - how did I miss it? I guess the idea has heated up mostly since 2009 with the emergence of some funding. The new UK Space Egency/ESA report gives it another boost. It will still need a lot of funding, but Reaction Engines claims that it "will be able to repay its development costs, meet its servicing and operating costs and make profits for its operators whilst being an order of magnitude cheaper to customers than current space transportation systems." Here's hoping that all pans out (and that there's sufficient launch business to support this project as well as SpaceX and other private space ventures - so much depends on the costs-to-orbit they achieve). It would be really great to see a true space plane taking off from a runway, flying to orbit, and returning to the same runway - just like in the movies (and even without a pilot).

This article clearly explains some of the hybrid engine challenges. The Wikipedia article explains some of the smart thinking that has gone into keeping Skylon cool and safe for reentry (cool enough to allow an integral ceramic skin to do most of the work, although active cooling will probably be needed for the wings).It will still land as a glider like the space shuttle - no plans to retain fuel and re-start the air-breathing engines for landing.

I may have missed Skylon (until this very recent blog post), but members of the Orbiter community didn't and there is already a cool add-on version as well as some additional work based on that model. I downloaded the basic one by "inzane" and tried it out just a bit (mainly for screenshots). I wasn't able to make orbit on my first try - probably missed some steps in the instructions. Hey, it's new technology! It's also a very cool-looking 3D model.

Although Skylon is an unpiloted launch vehicle (essentially a huge UAV with some serious autopilot smarts), there have been some studies on possible passenger capabilities, and the Orbiter add-on features a passenger module which is visible in the screenshot above. I posted a few more screenshots on my Flickr page.
Posted by FlyingSinger at 8:00 PM