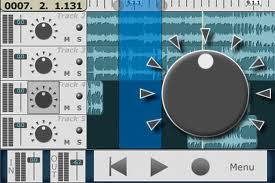 I've been trying out some of the more recent music creation apps for the iPhone and iPod Touch. I wrote about ThumbJam the other day, and I've just bought and tried out another amazing little app, Multitrack DAW. "DAW" means "digital audio workstation," and this app is a pretty credible rendition for a pocket-size device (and for just $10 with 8 available tracks). It can be upgraded to 16 ($8) or 24 ($15) tracks through an in-app purchase.

Yesterday we prepared our house for the approaching Hurricane Irene, and today we are "hunkered down" and waiting for its powerful wind and rains to pass by. So far so good as far as damage and flooding (none) and electricity (haven't lost it). So in honor of the hurricane (now "only" a tropical storm), and to test out this new recording app on something simple, I recorded a short version of the classic "Goodnight, Irene" with acoustic guitar, multiple vocals, and finger snaps. It works quite well, and the user interface makes excellent use of the small screen space and touch-screen controls. In the screen shot above, you can see the big pan control that pops up when you select the small one on the track.

Multitrack DAW is missing a few things that full-size recording programs like SONAR have, most notably any sort of reverb or delay (it does have compression and EQ). This is not a horrible limitation if you use this app for its most obvious purpose, which is as an always handy "scratch pad" for song and recording ideas. It has very complete file transfer features via a WiFi network, allowing for import/export of individual tracks as well as complete mixes. Once I get a new PC to run SONAR (my old home desktop PC died recently), I will be able to transfer works in progress easily enough.

In the meantime, I will experiment with ways to integrate the various music apps to help me write some new songs. Many of them now support some sort of copy/paste between music apps, though currently there are a couple of competing standards so you can't directly transfer between all music apps. Another limitation is inputs. On the iPod Touch, you can plug in a combination microphone/headphone device for direct audio input. I have also ordered an adapter that allows line-level inputs (with headphone monitoring) so I can directly record other devices (keyboards, guitar processors, quality microphone pre-amps, etc.). This adapter costs more than the app itself (about $30)!

When you think about the old 4-track cassette systems that cost hundreds of dollars and had far less capability, this app is amazing, even if you spring for the extra $15 for 24 tracks for a total of $25. Crazy.

Update: I learned that ThumbJam supports both common iOS music copy/paste formats when it copies, so I can actually copy a track from TJ and paste it into Multitrack DAW. Excellent!

Posted by FlyingSinger at 12:30 PM