ThumbJam: Where the Songs Are 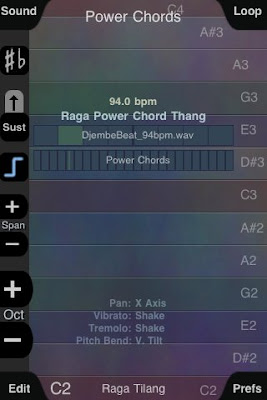 Songwriting comes and goes for me. A project like my 2010 "Message from Tomorrow" CD will typically inspire a bunch of songs, although not as many as I would like. Actually there are usually many songs started, just not very many finished. But fortunately for my first two CD's, I had a small backlog of older songs that I still liked well enough to want to rediscover and record. Now those old chestnuts have mostly been mined, leading me to wonder where the inspiration will come from for my next recording project.

Now I know. I discovered ThumbJam for the iPod Touch (and iPhone), the first music app I've found that I believe can really help me with songwriting and recordings. Basically it's a bunch of  nicely sampled instruments with a simple loop recording system and a brilliant interface for playing the instruments. Rather than trying to make a guitar fretboard or conventional black and white keyboard fit the iPod/iPhone touchscreen, Thumbjam presents a simple full-screen panel of notes in a chosen scale and key (you can play up to 6 notes at a time if your fingers will fit). Simple controls line the edge of the playing area, and the accelerometer is used to provide intuitive control of volume, pitch bending, vibrato, and tremolo. It's crazy good. Check out some of the videos here.

My big obsessions in life are music and flying, and right now I'm in a long-delayed flying phase, but over the next few months, increased business travel and fall/winter weather will reduce the flying as it always does. But I'm already thinking about getting a new PC for recording and flight sims (my 2002 desktop recording PC has finally died). I have recording software, drum machines, guitars, a MIDI keyboard, sample libraries, music apps, etc., and I have used all of these things to inspire and help me write songs. But none of those things brings the control of instrument sounds, scales, keys, and rhythms into an accessible, intimate, intuitive, powerful, and always handy form as Thumbjam does. I've already recorded three new song ideas in the first 3 hours of playing with it. I think it's the beginning of a beautiful friendship.
Posted by FlyingSinger at 8:59 AM