One thing I've always had a problem with in my own recording efforts is drums. I've used all sorts of pre-recorded drum loops in my songs and demos (including a set recorded by Mick Fleetwood), and I've tried to learn the various drum programming tools or plug-ins that are available for use with SONAR, but I never quite "got it." I admired (and envied) my producer Roger's ability to hear me play a new song on acoustic guitar and immediately start to lay out a drum track that works for it in Protools. It's talent and experience, I know. I want some!

I still don't have that ability, but I made a breakthrough this weekend with an old (1991!) book and a new iPod Touch app. The book is Drum Programming (A Complete Guide to Program and Think Like a Drummer) by Ray E. Badness (love that name!). It's a thin book with basic discussion of the features and limitations of drum kits and drummers (including the unfortunate fact of only two arms and two feet). Plus a ton of examples in a very simple tabular notation. 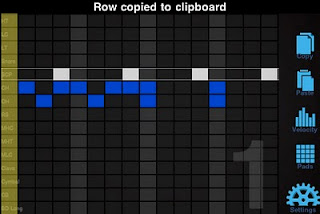 The app is Easy Beats 2, and it's just great. I had played with the free version and wasn't too impressed, but the ability to save and load patterns and drum kits in the full, updated version ($4.99) makes a huge difference. I was quickly able to enter the examples from the Badness book and hear the effects of different kick drum, high-hat, and ride cymbal patterns. It's easy to experiment with changes and new patterns, and you can easily sequence up to 16 patterns into a full song. There are a number of different drum kits, from basic synthesized kits to real recorded kits and more.

Best of all, this simple deconstruction of drum track basics, combined with a DIY "workshop" on drum patterns, now has me listening with fresh ears to the drum parts on all sorts of songs, even songs I've heard a million times or even wrote myself (with drums programmed by Roger). I still haven't done a fully original drum track for a song of mine, but I think I'm getting close. I have ordered a new, powerful laptop PC and the latest version of Cakewalk's recording software (Sonar X1). This will replace my now-dead 2002-vintage desktop PC which would barely run SONAR 3. With this and the many new music tools on the iPod Touch, I'm ready to start a new musical chapter of some sort.

Meanwhile I have a few new musical experiments on SoundCloud.
Posted by FlyingSinger at 1:43 PM