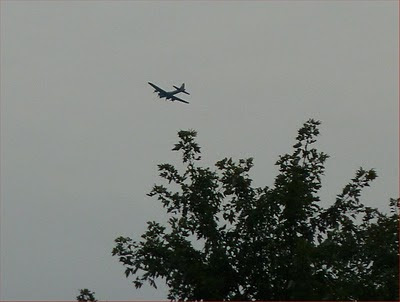 I learned this weekend that the Collings Foundation is in town this week, flying their B-17, B-24, and TF-51 war birds out of nearby Worcester airport (KORH). I learned this when a B-17 flew over my back yard Saturday at around 5 pm, then again at about 6 o'clock. That's when it hit me that it had to be sightseeing rides out of Worcester. I checked the schedule and found that there was a 5:30 pm flight today, so I was ready with a camera. Around 5:45 he showed up, higher and well south of me. A little later he was closer and made a few cool turns (still high though, maybe 2000 feet). Then I assumed he was gone, but at 6:15 I heard the rumbling again and ran to the back yard just in time to catch him flying directly overhead! I took a video this time. He was heading back to ORH (I could see him lowering the landing gear when I reviewed the video).

While checking the schedule I took the opportunity to schedule a flight myself in the B-24, with which I have a family connection. That will be 8:30 Monday morning. I'm psyched!
Posted by FlyingSinger at 8:24 PM

Glad you asked, Craig. Both B-17 (Boeing) and B-24 (Consolidated) were 4-engine "heavy bombers" in WW2. B-24 was a more advanced design with more range and payload but was much harder to fly. My late father-in-law flew the B-17 first (which was a dream to fly, he said) then the B-24, which was a bear to fly. But Charlie flew the 24 in combat in the Pacific and survived. The flight was amazing, and I still plan to blog about it, I've just been really busy (got some photos on Flickr/FlyingSinger). I got to visit all the crew stations.

Getting a flight (with minimum of 6 paying passengers) is a matter of making a donation to the Collings Foundation in the amount of $425. It's not something I do every day but to experience a small piece of history and a connection with Charlie's world, it was worth it to me. I wrote an article about Charlie's flying experiences back in 2000. It's available here: http://www.migman.com/downloads/cook000923.pdf