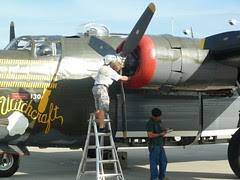 Wow, busy fall. Not much time for blogging. I didn't even blog about one of the coolest things I've done in a long time. On September 26, I took a flight in a B-24 Liberator! After seeing the Collings Foundation's B-17 fly over my house, I called their flight coordinator and booked a B-24 flight the next morning at Worcester Airport. It was amazing. After takeoff, my fellow bomber enthusiasts and I were able to wander the whole aircraft, from the tail gunner position, to the waist guns, along the narrow catwalk through the bomb bay, up to the flight deck, and to even crawl through the tunnel to the bombardier's nose position. 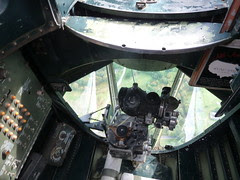 We stayed low and the whole flight only lasted about 30 minutes, but it was enough to give me a feel for what it was like to fly such a beast. It's built to carry bombs and fuel with not much in the way of comforts for the crew. I have even more respect now for the WW2 aviators who flew these big noisy things on long missions, often with people trying to shoot them down.

More B-24 pictures on Flickr.
Posted by FlyingSinger at 7:47 PM