Too Much New Music!

I seem to have a real need for the constant stimulation of new music, though this creates the problem of not having time to listen to all of it. I get most new music as MP3's, mostly from Amazon, and most often on sale (sometimes free), though I will pay full price for music I "must have now." Aside from Amazon's daily deals, I learn of new music through Paste Magazine (now called Paste mPlayer), from NPR (new music email list), on Pandora, through Facebook friends' recommendations, and sometimes even from the radio (usually 92.5 The River). Probably other ways too. 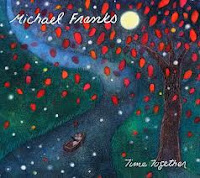 Just in the last week I bought a classical collection that was a $1.99 Daily Deal (The 99 Most Essential Autumn Classics), a new Michael Franks album that is wonderful (Time Together) and a cool Donald Fagen album I had never heard until a song from it came up on Pandora while I was doing dishes (Kamakiriad from 1993). Also a bunch of free Amazon samplers, including the very relaxing Native American Flute Lullabies.

So am I listening to all that great new music? No, actually I'm listening to a "must have now" album that I just bought, Katie Herzig's new one, The Waking Sleep. It sounds good so far! I'm actually shuffling that with some of the other recent ones as I write this blog post with two ulterior motives: to test out my new Feedburner feed and "follow by email" widget (found just to the right), and to delay starting on a bunch of "must do now" house work!
Posted by FlyingSinger at 11:10 AM