My Delayed Love Affair With Russia 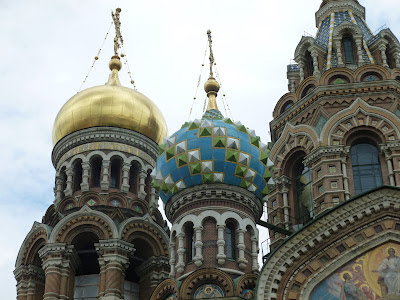 I have long been fascinated with Russia. I even took four semesters of Russian in college (back in the mid-seventies - almost all forgotten except for reading and writing the Cyrillic alphabet). But I never made a trip to Russia until earlier this month, when I attended an optics conference in St. Petersburg. I naturally added a few days to the trip for some sightseeing. St. Petersburg really is a fantastic city, and I was fortunate enough to have excellent (hot) weather and "white nights" for the whole week I was there. Everything was great. Here are a few highlights. 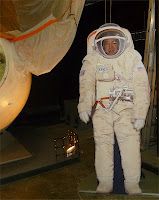 Space Museum - There was a small space museum on Peter & Paul island with a lot of interesting artifacts of the Russian space program. I used my small amount of Russian to chat briefly with a guard (I was the only one in the museum - all sensible people were out on the beach). We couldn't discuss much but it was fun. And he took my picture.

Helicopter tour - The space museum was inside Peter and Paul Fortress on the small island where Peter the Great established the city. I didn't know there were helicopter tours, but when I saw and heard the low-flying MiL Mi-8's, I figured it out. It cost 3,000 rubles (about $90) for a 14 minute flight on the 16 passenger Soviet-era helicopter, but it was awesome. Check out my YouTube video here and here (YouTube smoothed the vibration-induced shakiness, but this caused my captions to get all jittery - oh well). 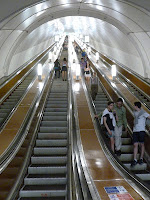 Subways - The St. Petersburg metro system is excellent. Built mostly during the Soviet era, the tunnels are bored through bedrock 75 to 100 meters deep (they also served as very deep bomb shelters during the Cold War). The escalators are VERY long.

Boat Tour - There are many boat tours on the Neva River and through the many canals of St. Petersburg, "the Venice of the North." The hour tour took 20 minutes more due to tourist boat traffic jams. Although the river portion was great, the canal part of my tour was not the best in terms of passing close to major sights. Check the route before you book one. 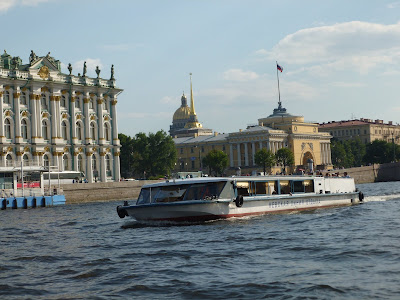 The Hermitage - I spent about five hours walking the many rooms of the immense Hermitage, perhaps the best art museum in the world. Simply awe-inspiring. I used a wonderful and free iPhone guide app on my iPod Touch to navigate. I later bought inexpensive virtual tour upgrades to this app. It's really great (especially on the iPad, even though it's only an iPhone app). I took a lot of pictures too (you can pay extra to allow this). A tiny piece of the Hermitage can be seen on the left in the photo above and in one of the many rooms below. 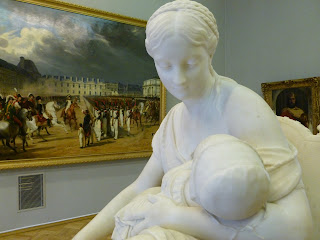 There was much more. Interesting people. Great borscht. The Swan Lake ballet. Lots of Russian signs to practice reading. Beautiful parks, gardens, and churches. I really want to go back.

If you ever go back, can you please take me with you?? Russia sounds absolutely amazing. I’ve never been there, but I hope I can visit it one day.