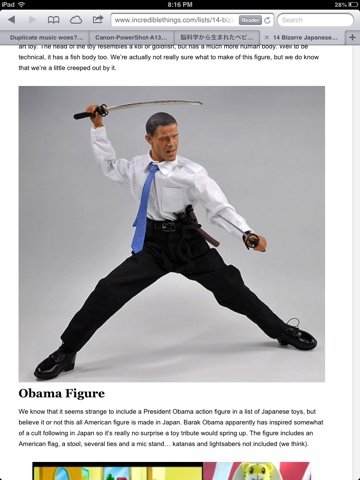 Posted by FlyingSinger at 9:03 AM

If only there were a matching John Boehner action figure... kids could pretend to have the battles going on at this moment in Washington DC.

(BTW - can we deep-six the captchas?)

OK, Craig, since you are probably my most frequent comment poster, I turned off the captcha for now. I already get a lot of comment spam even with that (presumably spammers that use humans to read the captcha for their robot posts). I will see if it gets worse. Unfortunately Blogger doesn't give you any options like the "word math problems" that you use. I also don't see any way to define "trusted commenters." I can restrict comments to visitors who are registered with Google or OpenID (not sure how you are registered), but most spammers have ID's which link to their spam target sites, so that probably wouldn't help. I think I could also set up site membership and only allow members to comment, but that seems extreme.