I just saw a Facebook post complaining that the iPhone doesn't offer a shortcut to immediately scroll to the bottom of a page (there is a top scroll shortcut). Someone commented that this is a "first world problem." This made me think about some of my own first world problems (in addition to suffering with this one). 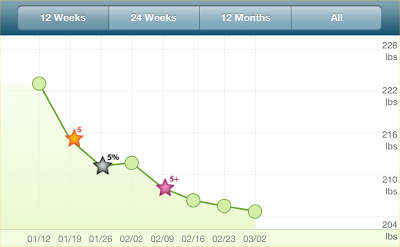 There's a rationalization connected with the Weight Watchers (WW) thing (I'm always rationalizing things). While the WW point system and app are well-designed and have helped me to lose weight, I wonder if this is really worth the roughly $18 a month it costs to subscribe. There are probably cheaper ways to track food and activity that would also work. But here's the rationalization: before I started this, I would buy an afternoon snack from the vending machine at work almost every day. Now that I'm tracking those points, I don't do that anymore (I carry fruit and carrots to work since those are "free" on the WW point system). Now I can say that I'm spending that roughly $20 a month on WW instead!

I guess this is all just a strange way to say that I have a lot to appreciate with these various first world "problems."

Posted by FlyingSinger at 6:04 PM

I first heard the term first-world problems from my daughter about 4-5 months ago. One could argue that any problem that a well-fed United States citizen has is a first-world problem. Whether we are born into the first, second or third world is all a matter of chance. There is no justice in chance. The extent to which first-worlders should share their wealth and resources with third-worlders is a matter of philosophy that has never been settled (the brothers-keeper dilemma). If one's attitude toward life is that all the peoples on earth should have equal wealth, then it is certainly a rationalization for first-world citizens to justify retaining any more of their wealth than the total wealth of all people divided by the total population of the earth. However, I don't think perfect equality is possible -- and philosophically I have no idea where to draw the lines as to my responsibility for the rest of humanity.

I think a lot of people (including me) use their sense of "guilt" (from having been luckier than others) to guide the extent of their outreach to those who are in greater need. But one's sense of such "guilt" is culture-and-upbringing dependent. Some people grow up being taught that people gets exactly what they deserve (i.e., earn). Personally, I think the concept of having "earned" something is pretty limited, but you know this already, having read my "Free Will Manifesto."

I think my bottom line is that it is a mistake to characterize a given first-world attitude as a rationalization when we really have no idea what the so-called "principled" approach should be. I don't think there is one. We make it up as we go along. Rich men, camels, needles, heaven, all of it no help.