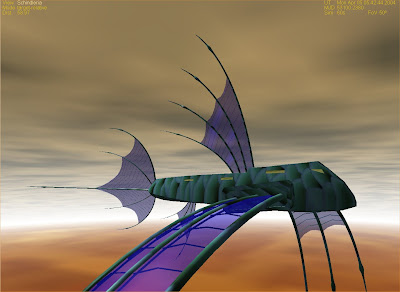 The 316th Blog Carnival of Space is running now at Next Big Future. I especially liked the one about colonizing Venus with balloon-like floating cities some 50 kilometers above the surface, where the atmospheric pressure is roughly the same as Earth at sea level (though the atmosphere itself is not exactly breather-friendly). This idea was floated some years ago, but it was fun to hear about it again.

The picture here is not exactly a floating city, but it is the only graphic I could quickly locate purporting to show something navigating the clouds of Venus. Simulated clouds of Venus with an Orbiter add-on "space yacht" based on the cover art for a 1970's album by Yes called Yessongs. Google any of that that doesn't make sense to you.

P.S. There are many strange and marvelous add-ons available for the Orbiter space flight simulator. I have pictures of many of them on my Flickr site.
Posted by FlyingSinger at 5:39 PM