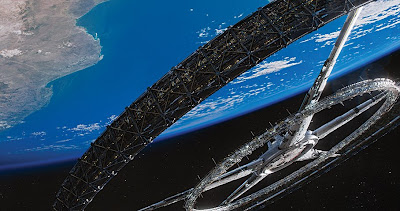 A few weeks ago I saw the movie Elysium, mainly because I was intrigued by trailers showing a huge Earth-orbiting space settlement, very much like those proposed in the 1976 book The High Frontier by Gerard K. O'Neil. I had that book back in the day (actually I may still have it). Back then they were called space colonies or habitats. The movie was both entertaining and irritating. The imagined technologies and the visuals were very cool, including Elysium itself, a rotating torus-type space habitat that is supposed to be large enough to house 500,000 of the super-rich in 2154 (the much-less-than-one-percent), when the Earth's surface has become just too ugly to stand (or something). There's a lot of shooting and other typical action movie stuff, and a plot based on the huge disparity between the haves (living in luxury in space) and the have-nots (living in squalor in Los Angeles, apparently). Matt Damon is the sort-of hero in a wildly implausible story. I wanted to see more of the Elysium habitat, but that was not the point of this movie. I'm not really sure what was, other than that grossly unequal wealth distribution might have unintended consequences. True, but hard to believe this could be the result. 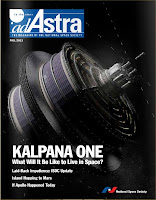 I hope that someday we do develop space settlements that are not gated communities for the super rich. Who will they be for, and why will we need them? I pretty much agree with the National Space Society (NSS) that humanity should strive to have places to live beyond the Earth for a variety of reasons. To provide a backup in case of extreme disaster on this planet, a way to preserve human and other life. To give access to additional resources. For economic growth that could arise from new frontiers and technologies. Because we can do it. And because it's really cool! I'm also a member of the Mars Society, and I think that eventually we will be able to colonize Mars (starting as early as 2023 if the Mars One project succeeds). But Mars is very far away, and if we can learn to capture near-Earth objects and use their materials to robotically build things in space, large space settlements might be practical, and they can be built in near-Earth orbit (like Elysium), or at other places in the Earth-Moon system, and eventually in other places in the solar system.

So I would say, plan for all possibilities. There's an essay by Rick Tumlinson in the current issue of the NSS magazine ad Astra called "All of the Above." In it he says, "the opening of space to human development is the most important activity of the human species" (in the long run, this is certainly true). He suggests that there is no "one true path" to achieve this, but that there are three key components:
I agree with these points, though I'm sure not all the governments who will be active in space in the coming decades will sign up for #3. 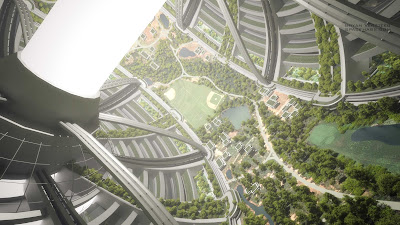 The same issue of Ad Astra has a space habitat on the cover. It's not Elysium, but the movie may have affected the timing since the article discussed was written in 2007. "Kalpana One" is not a torus, but a cylinder, and it's much smaller than Elysium, in consideration of the amount of mass needed to construct it, as well as radiation shielding and various safety factors. It is sized such that a 2 rpm rotation rate produces one G of rotational pseudo-gravity (low radiation and Earth equivalent G are essential, especially for growth and development of children). It might house 3000 people. It's really cool that so much analysis has gone into this. You can read the article here.

I've read a lot of science fiction on subjects like this. In terms of what things could be like if we open up and settle the solar system, I especially like Kim Stanley Robinson's 2312. Is the NSS agenda really just unlabeled science fiction? I don't think so. I think that technology is accelerating at such a rate that we really need to be planning for things like space settlements and Mars colonies. They aren't going to happen next year. But with the usual caveats (e.g., assuming we don't plunge ourselves into nuclear war or world-wide depression), some of these things could happen in the lifetime of my children. Or at least my grandchildren.
Posted by FlyingSinger at 7:46 PM

Ironically, I think the movie Elysium is right. The first artificial gravity colonies will probably only be affordable for the wealthy.

But that's historically true of practically every new technology from automobiles, telephones, to television.

And that's certainly currently true when it comes to space tourism.

But, eventually, these technologies become cheap enough to be available to the average Jane and Joe.

Maybe so, and I don't know how the form of society will be determined for orbiting communities. I suppose it will depend on their population and on who funds or "owns" them. I China-backed habitat may be different from one backed by the USA - or one backed by Google. But the early ones will also be frontier towns, with lots of work and mistakes to be made, some of the work dangerous, some "mundane" like farming and maintenance. I think these will require mixed populations of people with different skills and interests. Unless all the dirty work is done by robots, which seemed to be the case in Elysium (even police, at least on Earth).

I wonder what provides the angular momentum (or initially provided it, since space is frictionless) to make a massive structure like a space station rotate at 2 rpm. That is a lot of torque.

The initial spin up for a free floating torus could be easily provided by attitude control rockets.

Hey, thanks for posting this. I'm one of the coauthors on the Kalpana One design, so it's great to get a shout-out.