This week, Apple released the latest version of its iOS operating system for iPhone, iPad, and the latest generation iPod Touch (not mine). I read about various warnings and it seemed likely to work pretty well on an iPhone 5, so I backed up my stuff and installed it there. I decided to wait for a point release or two before installing on my iPad Mini, since I read warnings of possible bugs that could affect music-making apps. Since everything there seems to be working fine on iOS 6, I will wait for some other iPad music makers to give the all clear. Installation on the iPhone was easy and so far it's working well for me. 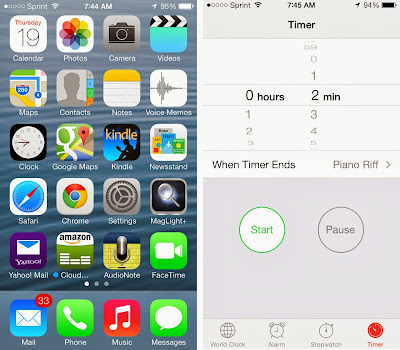 There are probably a zillion detailed reviews so I won't try to cover everything. My general impressions are similar to others I've seen. Although the use of high-contrast primary colors for many of the icons gives a crazy-quilt look to the home screen, I mostly like the clean, sparse, Crate & Barrel look. Much of it comes from using a wiry-thin font and having no borders around... pretty much anything. I'm mostly used to it already, although with app screens having minimal content and few controls like the timer, it's a bit TOO sparse. 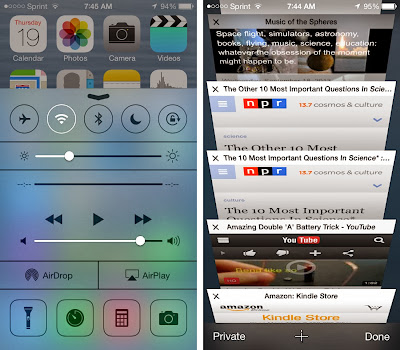 One of the coolest new things is the translucent control panel that you can access from any screen by flicking up from the bottom edge. It has most of the things you need to access frequently, like music controls, airplane mode, brightness, even a flashlight (the camera flash LED). I also like the changes in the Safari web browser, including a top-down "carousel" view of your open web pages. There are similar re-designs of the interface and display features for the photo album, camera, and other Apple-supplied apps. The new iTunes radio is pretty cool too, with artist- or style-based "stations" similar to Pandora, but based on the contents of the iTunes store (with a convenient button to easily buy any song that pops up and strikes your fancy). I quickly set up a station based on my own iTunes songs to see which "real artists" my music might suggest - a mixed bag in my first test - Neil Diamond (at least it was "Sweet Caroline") and Barbra Streisand?? But also Five for Fighting, Jason Mraz, Eric Clapton, and Billy Joel. So I guess their algorithm is OK with me (whatever they may use when the reference artist has very small sales numbers!).

One of my favorite iOS 7 things is not from Apple - it's a new release of one of my most frequently used apps, the Amazon Kindle reader. It is redesigned to comply with iOS 7 interface style guidelines, but more exciting for me is COLLECTIONS. Finally! I have a lot of Kindle books, and up to now, the iOS app has had no folder system or similar method for organizing them into categories (some physical Kindle devices have included collections for a long time). Collections are similar to folders, but you can assign any book to one or more collections (or to none). It works pretty well, and it is used for items on the device as well as in the Cloud (downloaded items appear in the folder with a small check mark). This is great, because it allows you to see everything you have placed in that category, whether or not it is local (and if you have a web connection, any Cloud book can be downloaded in a few seconds).
Posted by FlyingSinger at 10:07 PM

I think that the most wonderful update apart of the new interface look like, its Siri command voice, when i am driving , i feel like i am talking to a real person its very awesome, so i am very happy with ios 7

hi..Im college student, thanks for sharing :)