I believe that biochemically, serotonin and dopamine are more or less the only two things I enjoy. But at some other level, I often wonder why I like what I like. A lot of it seems to be about novelty. Although there is probably not much that is truly new, novelty emerges in a lot of ways. Surprise is one (perhaps obvious) way. This seems to be the key to a lot of humor - a funny writer or comedian sets up a certain expectation and then takes it in another direction.Creativity is another path to novelty. What could be more novel than a drawing or song you create yourself? Travel is another path. Simulation and gaming too - artificial travel, in a sense. Books are still a pretty good simulation (they run on that old school, low-energy, mobile processor we like to call "the mind"). There are lots of things to like in the world, but I don't like or even notice most of them.

What about a new song by someone other than myself? I often enjoy the sense of familiarity and surprise that this entails. A three-minute pop song has a fairly predictable structure. It will usually incorporate typical musical elements (western scales, chords, and harmonies, common instruments like guitars, keyboards, and drums). But I hear many new songs that do nothing for me, even if others might think they are great. And then once in a while - BAM. A new song just hits me. Why is that?

Here's an example of a recent song that just grabbed me, "Is This How You Feel?" by the Australian band The Preatures. I heard it on the radio (KCRW) when I was Los Angeles recently, and I instantly turned it up. I was about to stop the car to enter a restaurant for dinner, but I waited to hear the rest of the song, and to use the iPhone Shazam app to identify it. I went back to the hotel after dinner and found the song on SoundCloud and YouTube. The video is basic but effective enough. It's a strongly rhythmic and extremely catchy song. I love it, and even after hearing it twenty or more times, it still makes me smile. I don't know why. It's not the lyrics, which are barely coherent (best I can tell, it says, "I'm excited about you, do you feel the same?"). The singer sounds sexy and excited, and many listeners seem to find the song infectious. I had never heard anything from or about this band before, but now I expect I will buy their EP or album once it becomes available in the US. It reminds me somehow of the old song "Semi-Charmed Life" by Third Eye Blind, though it's a love song rather than a drug song. I'm not sure what's the same about them but they seem to trigger some of the same pathways in my brain, and that 1997 song is one of those I will listen to nearly every time it pops up.

Here's another example, Paul McCartney's brand-new song "New." This one is not quite so hard to fathom - the basic rhythm and tonality evoke Paul's Beatles classic "Penny Lane." It's not the same as "Penny Lane," but there is definitely something strongly "Beatleish" about this song, even if Paul's 71 year old voice is not quite as smooth as it was in 1967, it's still Paul, and it's still damn good. There are some very deep neural pathways that trigger on almost anything that evokes the Beatles (even partial matches like the bands Badfinger and Jet and the nearly forgotten early 70's singer-songwriter Emitt Rhodes). And yet... Paul has put out maybe 20 albums since the Beatles. I probably have half of them and love perhaps 3 or 4. Even Sir Paul himself doesn't trigger all my "Beatles = Good" neural patterns. I'm not sure why.

It's not all about other people's music. I like a lot of my own music, and I especially like the feeling of completing a new song or a new recording, sort of a "creative rush." Finishing a larger work like my three albums gets an especially big "like." But even my own work doesn't get an "all access pass." There are many things I write or record that do nothing for me a few days or weeks later.Even finishing a blog post is a little "creative rush." Pretty much any act of creation, though some can be so long in birthing (like my 2005-2006 space flight how-to book Go Play In Space), that it's hard to know whether I like it or not! With some distance, it eventually seems worth all the work, and I feel satisfaction in having completed such a project. Learning something complex (like how to fly, or Japanese) is another "project" type of thing with more long-run satisfaction than "creative rush," though there are some milestones that can be quite a thrill (like my first solo flight back in 2000). 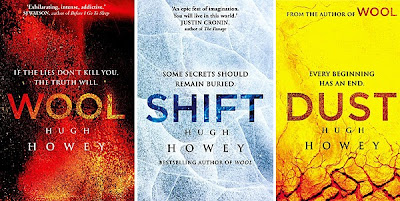 It's not all about music. Books are still a major thing in my life. I just finished the final novel (Dust) in a SF trilogy by Hugh Howey. I discovered the first book Wool a few months ago on Amazon, and I found it to be a very enjoyable piece of post-apocalyptic science fiction. This tends to be one of my favorite SF sub-genres. That seems odd even to me. How can stories of the end of the world and its aftermath be "enjoyable?" I don't know - maybe it's the puzzle aspect of figuring out how to survive. Maybe I identify with the heroes and heroines of these stories. I don't know - I just like many of these stories. I also like many books in many other genres, most of it non-fiction.

But what about the familiar? Why do I still love to hear many Beatles songs some 45 years after I first heard them? Why do I still enjoy pizza or haddock or Cocoa Krispies every time? Or seeing the ground or the clouds from 3,500 or 35,000 feet? Or seeing pictures of planets or galaxies from Cassini or Hubble? Or playing the guitar? Or speaking Japanese or French? These things are not exactly novel. I don't know. I guess there are a lot of ways to trigger those little shots of serotonin and dopamine. Evolution came through with some pretty fine home-grown drugs!

Posted by FlyingSinger at 6:43 PM