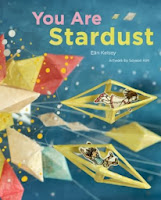 For background on the making of the book and the illustrations, including the science behind it, check here. The illustrations are photographs of 3D dioramas created by artist Soyeon Kim. They are really lovely. There is also an iPad app based on the book which looks cool, though I have not yet decided to spend $4.99 and 392 megabytes of storage on it.
Posted by FlyingSinger at 6:03 PM

I have bookmarked it and I am looking forward to reading new articles. online-essay-writer.org Keep up the good work.