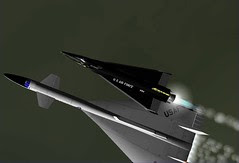 Aviation Week has an article about a supposed secret military "space plane" called Blackstar that may or may not be related to the supposed hypersonic Aurora reconaissance aircraft, and may or may not have been a manned military orbital test (or operational) vehicle in the 1980's and 1990's. It might have been launched from a supersonic carrier plane resembling the experimental Mach 3 XB-70 bomber of the 1960's. And as a colleague said, the author of this piece may or may not be vacationing in Guantanomo Bay and unreachable for comment. It might also have something to do with pulsed propulsion systems and strange strings of high-altitude clouds as discussed here.

Or not. I don't know. But I do know that the non-classified Orbiter add-on developer team of Greg Burch and Scott Conklin have developed something really cool that has nothing to do with this but looks an awful lot like the AWST artist conceptions (except it rides on top instead of underneath). Their "alternate history" X-15 Delta (developed from their earlier realistic X-15) is a very cool add-on for Orbiter, and it includes not only three versions of the delta-winged X-15 variant, but a new launch aircraft: the XB-70! I have only played briefly with this add-on, but it is another work of art in 3D and flight modeling as well as documentation. Download, install, fly, and take as many pictures as you want.
Posted by FlyingSinger at 1:19 PM