The Thrill of the (Orbital) Chase 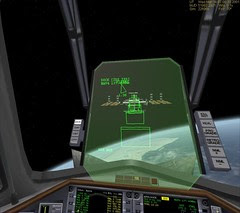 I'm working on an expanded second edition of my free tutorial book for Orbiter, Go Play In Space. This time I've signed up Andy McSorley as a co-author, and he has written a nice new chapter to guide our readers through a journey to Mars (with the help of Jarmo Nikkanen's Interplanetary MFD add-on). Meanwhile I'm working on another new chapter called "Dancing in the Dark" - a chapter title borrowed from Wayne Lee's book To Rise From Earth. The subject is rendezvous (which is called orbit synchronization in the Orbiter documention) and docking, one of the most satisfying tasks you can do in Orbiter. It can also be one of the most frustrating tasks for new users to learn, so I'm trying to do a good job of explaining how it works in this new chapter, including several diagrams inspired by Wayne Lee's book.

Like much of space flight, rendezvous and docking is largely a matter of timing, of literally being in the right place at the right time. Space is big and finding your way to the relatively tiny International Space Station in all that darkness can be tricky, even though Orbiter provides several excellent tools to guide your way there. Two important tips are precision and patience. Small residuals can add up to big miss errors over several orbits, and trying to rush your approach often leaves you hopelessly misaligned. Unlike the real shuttle astronauts who will spend several days and dozens of orbits to reach the ISS with minimal fuel use, Orbiter's futuristic "Delta Glider" lets you make relatively large and frequent "burns" as needed, and time acceleration lets you speed over the "boring" parts at 10-1000 times real time. More pix on Flickr.
Posted by FlyingSinger at 10:13 AM