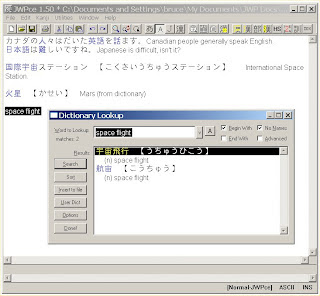 Learning Japanese was a major obsession of mine for quite a few years. I took classes and bought a lot of books and audio cassettes, and even a couple of electronic dictionaries, even though these were of limited usefulness to me since they are really made for Japanese users who read Japanese fluently. I did most of my studying in the pre-web 1980's and early 1990's when I was still a Mac user. Apple had a Japanese operating system called KanjiTalk that was pretty useful when I was studying kanji (Japanese has two phonetic "alphabets" of around 46 characters plus thousands of picture-like kanji characters whose meanings and multiple pronunciations must be memorized). Today I found a folder full of printouts of many pages of Japanese vocabulary and reading notes that I made on the Mac (the files are long gone since it's been years since I had a working Mac). Those notes would have probably become a blog if I were doing that now!

I don't have much time to spend on Japanese now, but looking at those notes and at the Japanese space books I bought last week has brought another wave of Japanese nostalgia. Japanese is not easy, but its intricate writing system has a puzzle-like beauty that I really came to enjoy, in addition to the utility and fun of being able to talk with people when I visit Japan.

So I decided to see what freeware Japanese learning tools are out there now, and I found a real gem, JWPce by Glenn Rosenthal of UCLA (physics!). This is a Japanese word-processor with a variety of features for non-Japanese users including a great dictionary and kanji lookup capabilities. It was inspired by an earlier program called JWP that I briefly tried out in the 1990's, but it's a complete rewrite with a different (and I think better) feature set.

Of course nowadays there are on-line translation tools like Babel Fish that include Japanese, endless web sources of Japanese text, and I'm sure there are also zillions of Japanese learning sites. With JWPce, you can enter Japanese phonetically or by copying and pasting, and you can easily look up kanji meanings and English definitions. This is much harder with kanji text on paper, though JWPce can help with that too - it provides multiple methods of identifying an unknown kanji from its components and stroke-count. It replaces about 10 kg of dictionaries I would otherwise have to carry around if I wanted to read Japanese text (there are many types of dictionaries for Japanese - I must own about 20).

Glenn's web site also has information on other Japanese software tools, books, and web sites. Great stuff, although it may not have been updated much since 2005 since I noticed a few broken links to outside sites (the download and support information is OK).
Posted by FlyingSinger at 5:16 PM

Congratulations on learning Japanese, and your renewed interest in the language! I lived in Okinawa, Japan for two years but never learned more than the very basics of Japanese. I wish I would have taken more time to learn while I was there. During my search on free Japanese language resources, I came across a couple of pages that I found useful. While it sounds like your level of understanding may be beyond these, why not check them out. Here is a link to my page where I have the links. Best of luck in your learning!