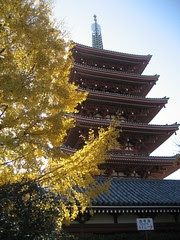 I'm in Tokyo for a few days on business, my first trip to Japan in three years, and on this sunny early December Sunday, I had time to indulge in a little nostalgia. I studied Japanese extensively in the early 1980's, and from 1982 to the late 1990's, I would spend at least a couple of weeks a year in Japan on business. This gave me a chance to practice Japanese conversation and provided at least a little motivation to continue to work on it. Since I only come to Japan every couple of years now and have a lot of other interests, I haven't really been studying it. Fortunately I didn't forget everything, and I can still talk with people about basic stuff and read enough to find a tempura restaurant and to read many things on menus and various signs.

Today my colleague and I didn't use any taxis or subways - we walked about 10 kilometers, from Akihabara to Asakusa to Ueno and back to Akihabara. Asakusa is an older section of Tokyo with a famous temple and pagoda, as well as busy Nakamise Street which has hundreds of shops selling various Japanese goods, at least some of which are still made in Japan rather than China. I remember going there on a bus tour on my very first trip to Japan in 1982 - there was a festival that day and the area was packed with thousands of people. It wasn't quite as crowded today, though there were a lot of people out taking advantage of the sunny weather. I took a few pictures before we set out to find that tempura restaurant, which ended up being in the basement of a department store in Ueno - much harder to find than I expected, even when I asked people in several shopping streets we passed through if they knew of a tempura restaurant in the area. Oh well - conversation practice.

I finally ended up in the space and astronomy section of an 8-story bookstore in Akihabara, but that's another post, probably when I get back to the states in a day or so. More pix on Flickr.
Posted by FlyingSinger at 2:51 AM