A Rocket a Day? 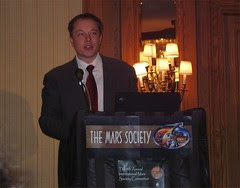 John Walker (no, that's not him) was the founder of Autodesk, Inc. and the co-author of AutoCAD. For many years he has maintained a web site documenting his diverse interests and providing a variety of free software tools, as well as articles and essays on various topics, some of them related to astronomy and space. Very cool web site.

One of the space articles is called "A Rocket a Day Keeps the High Costs Away" (1993). In it Walker talks about the chicken-and-egg problem of launch costs and space development - the idea that to make extensive use of space requires lowering the cost of putting payloads into orbit, but that as long as it costs so much to put things in orbit, only payloads that are considered "high value" can even be considered. I won't repeat his analysis here (too many qualifications required since he talks about the German V-2, among other things), but he makes a case that there is no reason that rockets cannot be produced and launched at much lower costs than they are today, as long as you plan to build and launch a lot of them. To those who say we don't have enough payloads to make use of all these low-cost launch vehicles, he suggests that someone try it and see what happens!

It struck me in reading this 1993 article that this is very much what Elon Musk (that's him, speaking at the 2006 Mars Society Conference I attended) is trying to do with the Falcon rockets at SpaceX. It's not quite Walker's "if you build it, they will come" idea, but it's a clean sheet of paper approach to building modern, simple, modular space flight hardware with the long range goal of increasing the flight rate and encouraging all sorts of people, organizations, and nations to do stuff with space. Of course Musk's really long range goal is to open up a new frontier on Mars and elsewhere in the solar system. But you have to start somewhere, and I'm glad he decided to spend some of his PayPal millions building a space company.
Posted by FlyingSinger at 3:55 PM