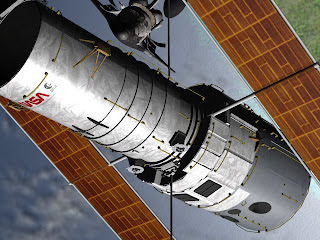 NASA introduced a much-needed redesign of its main web pages a few months back, but due to some problem with my computer that was interacting with something in the new NASA web pages, I was unable to view the site until yesterday. I finally got some debugging help and we figured out that it was Symantec Client Firewall that didn't like something about NASA's new design. We never figured out exactly what it was, but by turning off the firewall, loading the site, and then re-activating the firewall, it worked, and it still seems to work today after a reboot. Weird, but OK. The new NASA web design is a huge improvement, modern and easier to navigate, with various "MyNASA" customization features like bookmarks and play lists. It's pretty cool.

One of the first things I noted was a page with details on the upcoming final service mission to the Hubble Space Telescope, STS-125 now planned for Atlantis in August. I had read some news about this on several blogs that were reporting from the AAS conference in Texas, where NASA presented details of the mission this week (PDF slides are here). It will be a very exciting and challenging mission, and the upgrades to HST will greatly extend its life and capabilities. Three Hubble service mission veterans will be on the crew, and it will take five spacewalks to accomplish all the repairs and upgrades.

You can experience some aspects of the HST service mission using Orbiter (as shown above). Orbiter includes some scenarios with the HST, and there's also a much improved add-on version available. While you won't be able to make the repairs, you can fly the shuttle (the standard Atlantis or the more realistic shuttle fleet version) to rendezvous with HST and capture it with the shuttle's robotic arm.
Posted by FlyingSinger at 8:19 AM