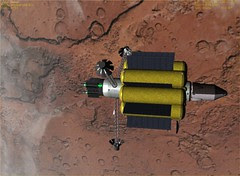 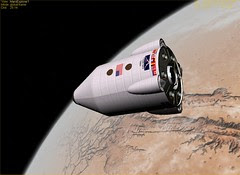 This morning's planned Grand Canyon tour was canceled due to bad weather, but instead of going back to bed as I should have done, I've been reading a book and some web sites and reviewing some developments in Orbiter add-ons. One that continues to fascinate me is the VASIMR project by Nick Dimitrov. He has released USS Bekuo VASIMR v.1.01, which adds a Mars lander and other improvements (see discussion in this Orbiter Forum thread). It now looks just like the Mars-bound spacecraft shown in this NASA concept video, and you can undock the Mars lander and take it down to the surface, though I didn't do too well on my first and only manual attempt.

The Mars lander is a nice touch, but the really cool thing in Nick's add-on is the propulsion modeling. VASIMR stands for variable specific impulse magnetoplasma rocket, and the add-on models this variable specific impulse feature. What does this mean? "Specific impulse" (ISP) is something like fuel efficiency, and with the VASIMR, you can tune the performance continuously, from low thrust and high efficiency through higher (but still not huge) thrust with lower efficiency. Even a small force can lead to large velocity if it is applied for a long time, and this is the secret to shorter interplanetary flight times - using an engine that is so stingy with your fuel that you can afford to run it continuously. Running the engine continuously instead of with relatively short "burns" requires special trajectory planning techniques as used for the Dawn spacecraft which is using ion engines on its long flight to visit Ceres and Vesta.

For a good explanation of VASIMR by its inventor, Dr. Franklin Chang-Diaz, watch this 5 minute "NASA Connects" educational video segment. I noticed that VASIMR is shown as a trademark in some cases now (with a TM symbol), and I found that in addition to his work for NASA, Dr. Chang-Diaz also has a company, Ad Astra Rocket Company, which is working on the development and commercialization of VASIMR technology. Ad Astra also has a subsidiary in Costa Rica, which is really cool. There's a video clip (also found here) on their home page showing a lab test of a VASIMR prototype.

As many people have said, predictions are difficult to make, especially about the future. But VASIMR is a really promising technology that could play an important role in making the resources of the solar system available to humanity.
Posted by FlyingSinger at 11:37 AM

Thanks for the updates, Bruce. I was half way through a reply to your previous post when something came up and I had to abandon it.

I was going to give you an update on the progress of VASIMR development and let you know that Dr. Chang-Diaz had taken his invention to the private-sector. I'll just add that they seem to have completed their testing of the 100 MW prototype engine (VX-100), and are ready to begin development of their first flight model (VF-100) as well as testing of a 200 MW prototype (VX-200). I think they have also lined up their first potential commercial client (although the name escapes me at the moment).

Keep up the good blogging. I appreciate your efforts even if I seldom get the chance to contribute in kind.