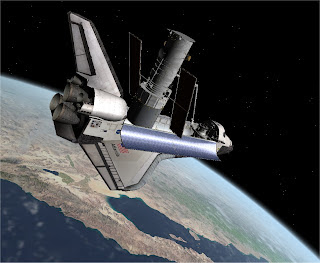 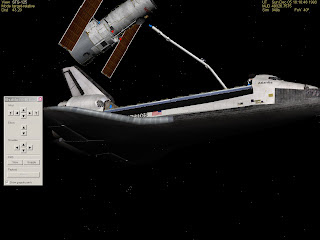 I've finished my "Robots, Astronauts, and You" PowerPoint (with lots of bells and whistles), and I'm working on the Orbiter scenarios that I will use during my upcoming talks. I always try new things but usually end up using a few old reliables like a shuttle launch, an Apollo moon landing, and a solar system tour.

This time I think I will start with the recent STS-124, with Discovery still docked at the current configuration of the ISS and passing over New England. I'll give a little tour of the robotic bits of the ISS (mainly robotic arms including DEXTRE, and automated supply ships, Progress and ATV). Then I will talk about exploration robots (HST, Mars Rovers, Cassini, Phoenix) and do a robotic session with Orbiter - land Phoenix on Mars and deploy its systems, then simulate Hubble pointing at and zooming in on Jupiter and Mars from Earth orbit (using the telescope MFD, a simple add-on that allows you to view and zoom in on objects as seen from a designated spacecraft - the spacecraft doesn't have to be a telescope or even point at the object, it's really a sort of "display hack" in Orbiter). I will also fly Cassini through the rings of Saturn with a close pass near Titan.

Finally for the astronaut section, I think I will go with a Saturn V launch and an Apollo landing (using the great AMSO add-on), maybe Apollo 15 for both (so I can deploy and drive a Lunar Rover), and if there's time, I will simulate part of this October's STS-125, grabbing Hubble with the RMS and placing it in the payload bay of Atlantis. I don't have all the proper mounting hardware for the bay and I'm not that good with the RMS system, but if I set it up almost ready to grab (and use 10x time acceleration for moving the arm), I can do it pretty quickly. A quick EVA (mainly to show the size of HST and the shuttle) and I'm done. Can this all be done in 90 minutes (with a good break in there)? I think so, but that's why I'm practicing chasing HST today!

You can see in the bottom picture that Orbiter gives you some help - you can turn on colored arrows pointing to the valid grapple points, and you can go outside the shuttle to get a better view of the problem. The real shuttle has nicer windows and a few of its own computer aids for RMS operators. I'm sure plucking the huge Hubble from orbit is something the mission specialists have practiced a lot in their own simulators.
Posted by FlyingSinger at 10:06 PM