And the Pursuit of Happiness! 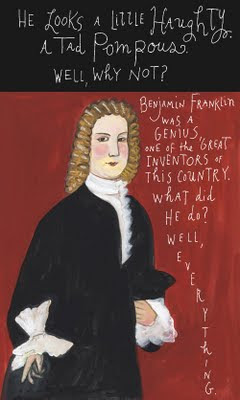 Can this really be called a blog? If so, then what I am doing is something much less, perhaps just a bl.

I just discovered And the Pursuit of Happiness, Maira Kalman's monthly illustrated feature about American democracy which the New York Times calls a blog. It's wonderful. The current one (July) is about Benjamin Franklin. Earlier posts I looked at just now featured Memorial Day and Lincoln.

I'll have to go read the rest of them when I have time, which I don't now. I have to write a short PowerPoint called "The Once and Future Moon" for my presentation at Starfest 2009 tomorrow night. It has to be short because I will have just 30 minutes and I also have to launch a Saturn V, land Apollo 11 on the moon, and take NASA's future Orion and Altair spacecraft for a quick spin around the moon (all courtesy of the Orbiter space flight simulator). Yes, I did wait until the last minute. I better get busy.
Posted by FlyingSinger at 8:35 PM