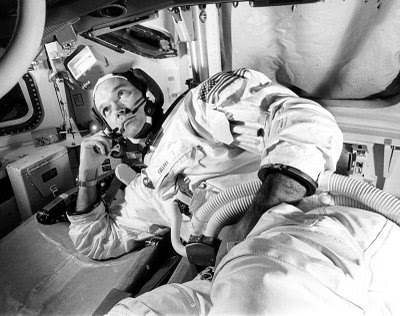 We're coming up on the 40th anniversary days for Apollo 11 - the mission launched on July 16, 1969, and the first moon landing was on July 20. I just listened to Nancy Atkinson's 365 Days of Astronomy podcast from July 11, "Apollo 11 Through the Eyes of a Young Girl." Nancy even put some of her memories into musical form with a folk-style song called "Who Flies the Ship When Mike Collins Goes to Sleep?" Neil and Buzz get all the glory, but it's good to remember Mike, too (pictured above, training for Apollo 11 - it's hard to find photos of Mike in space!).

My own memories of this time in 1969 are not musical (yet!), but they are pretty vivid. As I wrote back in 2007, that was the summer between my junior and senior years in high school, and I was lucky enough to spend six weeks of it at Ohio University in an NSF-sponsored Student Science Training Program. There was a TV in the lounge of my dorm (I think it was Washington Hall), and that's where I watched with a bunch of fellow high school science students from all around the U.S. as Neil Armstrong took his first steps on the moon (it wasn't all science - we had some great field trips and I even had time to develop a serious crush on a girl from Virginia).

I had just turned 16 in June and was still planning to be an aeronautical engineer - it really seemed like anything was possible that summer, and that the way to do "anything" was through science and engineering. I finally ended up an optical engineer (with a few detours along the way for computer science, physics, and music), but I certainly attribute my strong interest in science, math, computers, flying, and space to the U.S. space program, especially the Gemini and Apollo programs that I followed intently through my elementary, junior high, and high school years, 1962 to 1970.
Posted by FlyingSinger at 10:57 PM