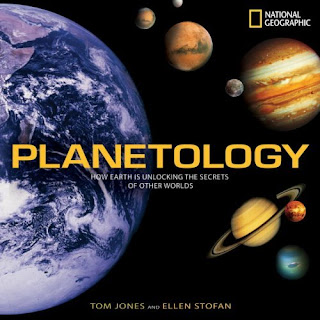 The shuttle Discovery (STS-128) docked with the International Space Station today, on the 25th anniversary of its first launch (STS-41-D, August 30, 1984) - that's amazing in itself! I haven't been following this mission very much this weekend, but I have been reading a very good 2008 book by former astronaut Tom Jones and planetary geologist Ellen Stofan, Planetology (subtitle: unlocking the secrets of the solar system).

Jones is a planetary scientist who flew as a mission specialist on four shuttle missions from 1994 to 2001 (his memoir Sky Walking is excellent). His first two flights in 1994 were Space Radar Laboratory missions, which used special imaging radar to map the surface of the Earth. Some of his "ground truth" training for that mission featured geology field work that also included his co-author, Ellen Stofan.

I'm trying to save money and shelf space by using my local library more, and I happened to find this book there last week. The cool thing about it is that it is not your typical solar system tour coffee-table book, with a profile of each planet from Mercury outward. Instead it takes a functional and comparative approach, looking at water, volcanoes, tectonics, wind, etc. on Earth and on the other planets and moons. This takes advantage of our extensive knowledge of the Earth which can be compared with imagery and other data from our various probes. It's very up to date, well written, and profusely illustrated. The authors have done a good job writing for a general audience, but their approach reflects the way the science is actually done more than many books "about the solar system."

The only problem will be convincing myself to just read the library copy and not buy a copy for myself!
Posted by FlyingSinger at 10:47 PM