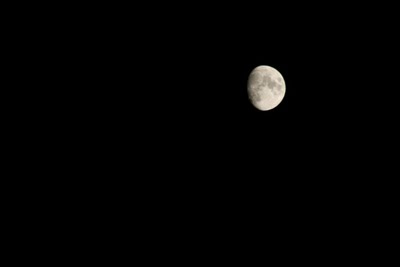 Starfest 2009 went really well last night, thanks to the contributions of many volunteer members of the Aldrich Astronomical Society, not to mention some amazingly clear skies. The Moon looked a lot like the picture shown here (thanks to KCrawfish03 on Flickr for this shot). It was bright, but pretty low in the sky, so it allowed for some great Moon viewing and also allowed some other sky objects to be seen quite well by our telescope viewing guests once it got dark around 9:30.

Before that, we had some really cool presentations in several classrooms at Anna Maria College. I started out as a greeter, helping to explain the options to visitors as they arrived (they had to make some choices since we had a lot of presentations and activities to choose from). I then attended a really nice presentation on the Kepler mission to detect Earth-like planets orbiting other stars. Kevin Boucher's presentation included a demo using a Lego model of planets orbiting a light bulb "star" with a photodetector connected to the PC to graphically demonstrate how Kepler detects planets by accurately tracking the light output of some 100,000 stars.

My presentation "The Once and Future Moon" featured a small pep talk on how, yes, we really did send astronauts to the Moon from 1969 to 1972, including some recent pictures of the Apollo landing sites taken from the Lunar Reconnaissance Orbiter (it's a shame that you still have to talk about that, but Moon hoax conspiracy wackos are still out there). But the main event was a very noisy simulated Saturn V launch in Orbiter, followed by a simulated Apollo 11 Moon landing. The kids (and adults) seemed to really enjoy that, especially when Neil said "the Eagle has landed." Then it was 9 o'clock and I sent them all to get their telescope etiquette briefing so they could go look at the Moon itself through the telescopes behind the science building. I don't know how many guests we had, but it seemed like a lot of people, and they seemed to all be having a pretty good time.
Posted by FlyingSinger at 9:29 PM