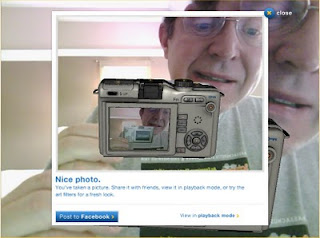 It's awkward but it sure is clever. If it were on a nice, large touch screen like the (ahem) Apple iPad, it would be a lot cooler since you could press the buttons right on screen (as I tried to do anyway on the PC screen, silly me). That's silly me in the GEB-like self-referential scene above.
Posted by FlyingSinger at 10:15 PM