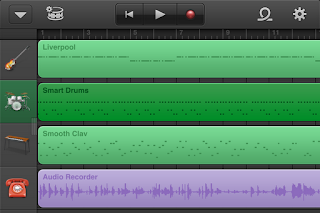 You can have too much of a good thing, and I may be approaching that point with music making apps on the iPod Touch. I've got a bunch, some of which have already given birth to songs (or at least fragments of songs), which is their main purpose for me. I wasn't even going to try Apple's Garageband 1.1 app because I already have at least two recording studio apps that are working well for me. But for $4.99, I said what the heck. It's a huge app (over 500 MB), but that's why I bought a new 64 GB iPod Touch a few weeks ago. 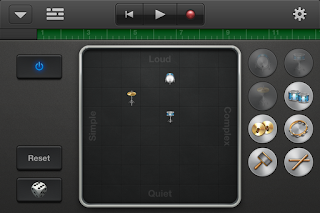 And wow, is it amazing! Although it "only" has 8 tracks and lacks some of the features of Music Studio 2.0 and Multitrack DAW, it's really the ideal sketch-pad for developing song ideas. The biggest things for me are the "smart" instruments that can automatically generate drum, bass, guitar, and keyboard parts with many variations, based on the chord progression I play. Smart drum parts are based on a grid with loud/quiet and simple/complex axes, where you can drag various parts of the virtual drum kit. I set the tempo and then move these elements around until I get a drum part that sounds interesting. Then I choose a key and play around with the pre-defined chords for that key in the smart guitar, keyboard, or bass screens until a song idea appears (you can also define your own chords). I'll record a minute or two of these parts, then "scat sing" into the audio microphone - this will suggest melodies, rhythms, and sometimes words. Then I may switch to real guitar to work out the song structure. Et cetera. 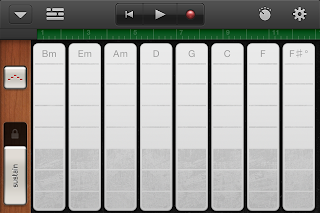 The "smart" parts are all MIDI tracks, playing back with sampled instruments that sound pretty realistic even on the guitar parts. This means the file sizes are pretty small until you start adding audio tracks. One thing that is lacking is a "piano roll" view for editing the individual notes of the MIDI tracks (and there is also no MIDI export or copy/paste). But that's OK, since I don't expect any of these GB tracks to be parts of final recordings. If I do get anything that is so brilliant it needs to be used, I can figure out how to export that track as audio (or something).

Garageband for iOS has many more features. Here's a more detailed review of the 1.1 (iPhone) version. And here's an even more detailed review of the original iPad (1.0) app. While it would be nice to have more screen real estate to work with (i.e., an iPad), Apple has done a great job of adapting the user interface to the small iPhone/iPod Touch screen, and it's really quite easy to use, as well as supremely portable.

Posted by FlyingSinger at 1:31 PM