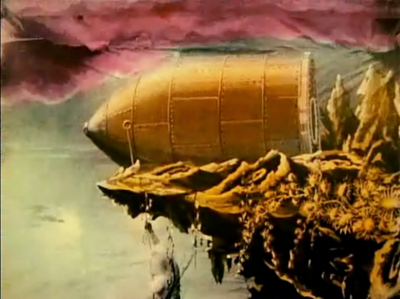 Today's Amazon MP3 Daily Deal is a new album by the French band Air for $3.99. Normally I'm not a big fan of Air's electronic/pop music, but this is an interesting special case. They composed a new soundtrack for the 1902 silent movie "Le Voyage Dans La Lune" which has recently been restored to its hand-colored original state (the video is included with the MP3 download). This 15 minute film is said to be the very first "science fiction" movie. Loosely based on Jules Verne, it depicts a trip to the Moon in a hollow artillery shell fired by a huge cannon.

The trip is fast and the shell hits the Man in the Moon right in the eye (so much for the science!). The band of intrepid French explorers soon encounters angry Moon natives and of course fighting ensues. They retreat to their capsule, which has been conveniently placed on a cliff with a rope attached to the nose, which one of the men uses to pull the spacecraft over the edge (I had always wondered about the return plan with an artillery shell spacecraft and no known cannons on the Moon). It quickly falls to Earth for an Apollo-like water landing, whence the explorers are rescued and hailed as heroes.

Considering this was made a year before the Wright Brothers flew, it's really pretty impressive despite a few liberties taken with the physics. For the price of a latte and 15 minutes, it's an amusing piece of space pre-history. And the music is OK.
Posted by FlyingSinger at 9:18 AM

Thanks for sharing! I love Le Voyage Dans La Lune!