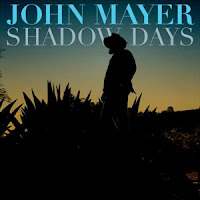 I really like John Mayer's songwriting, guitar playing, and most of his recordings. He's written a number of songs I wish I wrote. He's got a new album in the works called "Born & Raised," set for release on May 22, and the first single is a gentle, confessional-sounding ballad called "Shadow Days" (streaming from his blog post). It didn't really do much for me on first listen until about two-thirds through when there's an instrumental bridge with a nice George Harrison-like slide guitar lead. It's a decent song but I wouldn't say it's one of his best, though some of his recent tunes have taken a few listens to really grow on me.

I have to admit that the songs from his first three albums still work better for me. He really blows me away on many of these recordings, and I have spent a lot of time listening to, analyzing, and learning some of these songs. One of my favorites is 83 (video), a nostalgic look back at the innocence of childhood. Simple and moving.
Posted by FlyingSinger at 6:30 PM