Last September, I took a flight in the Collings Foundation's B-24 "Witchcraft" when their "Wings of Freedom" tour came to Worcester Airport. Today I visited the Foundation's headquarters for one of their public events, "The Race of the Century." This is a living history of transportation progress in the form of brief races between different vehicles (and sometimes horses and a guy running). The Collings Foundation owns many vintage vehicles and aircraft, from horse-drawn wagons to Stanley Steamers to various aircraft, including a 1909 Bleriot monoplane (this was the type of aircraft that first flew the English Channel). 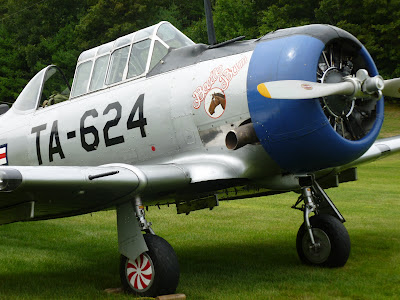 The races and static displays at the Foundation's museum were great, but I paid (quite) a bit extra and took a flight in the foundation's AT-6 Texan. This is the most powerful single-engine aircraft I have ever flown, and I was really only expecting a ride. I was pleasantly surprised to learn that it was technically an instructional flight, and that the aircraft is fully aerobatic, if I was interested in that sort of thing. 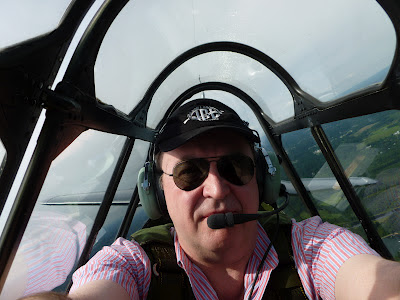 Well I certainly was! Rob Collings was the pilot (he is the chief pilot and also directs the foundation), and of course he handled the takeoff, aerobatics, and landing, but I got to do some basic flying and some steep turns which were fun. We climbed to 3,500 feet and headed back to the field for some really fun stuff. First a loop, which was amazing. I have only done a few of these in my life and it's always a blast to see the ground coming up from "above" (visibility forward and aft was pretty poor from the back seat, but it was great through the top of the canopy). I love to feel the G-forces too (maybe 2G). We also did a couple of aileron rolls and a barrel roll. Whoopee!

I wanted to concentrate on the flying and on enjoying the aerobatics, so I didn't take many photos. The self-portrait above was not taken during a loop (I stowed the camera for that stuff). And I was having more fun than it may appear.

More pictures and a couple of videos (Stearman PT-17 takeoff and landing) my Flickr pages.
Posted by FlyingSinger at 5:14 PM