I started to follow the Collings Foundation on Facebook, mainly because they post some of the coolest in-flight photos as they fly their B-24, B-17, and P-51 war birds on their "Freedom Tour" around the USA. Today they posted the wonderful shot below, taken from the cockpit of the P-51 as it flew south along the Hudson River corridor, with Manhattan off the left wing, and a B-24 off the nose (Collings Foundation photo). 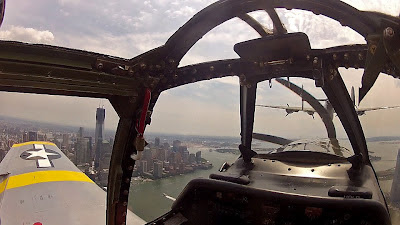 Although there are special rules, you don't need to be flying a commercial or historic aircraft to fly along the Hudson like this. I was lucky enough to fly it once, back in 2005 when I was still somewhat active in flying and a member of the Worcester Area Pilot's Association. One of our weekend events was to fly a group of airplanes from Worcester to the Hudson River in New York state, where we joined the low-altitude traffic pattern for the corridor (south along the Jersey shore, north along Manhattan's west side). I flew as co-pilot in another member's Grumman Tiger. I handled the radio while we both looked for traffic (it is a pretty busy area). New altitude rules were introduced in 2009 after a collision, but the basic idea for small private craft is to stay low, below all the airline traffic for the three nearby major NYC airports. I believe we flew at 900 feet above ground (or river) level in 2005. It was really cool. Here are some pictures I took. The first one needs no introduction (flying south - I was in the right seat): 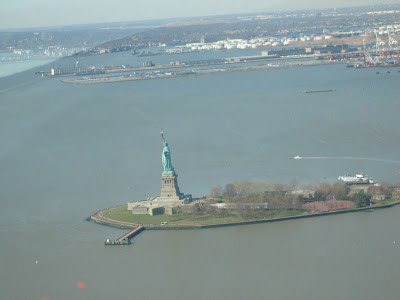 This was flying north after turning around over the bay. This is the Verrazano Narrows Bridge, looking over Brooklyn towards Manhattan: 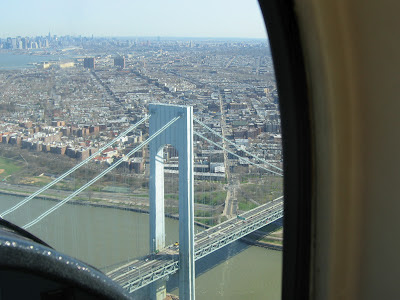 This one shows how close we were to Manhattan itself, flying north along the west side of the island (Empire State Building): 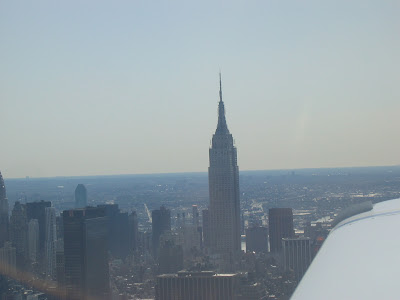 Finally one of my favorites, a close shot of the aircraft carrier USS Intrepid, which is a very cool air museum that is docked at Pier 86 (there's also a sub you can tour). Today you would see a large white structure on the aft deck which is the new home of the space shuttle Enterprise: 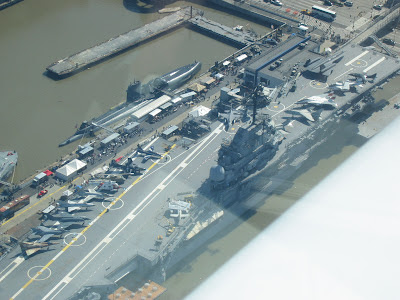 Posted by FlyingSinger at 11:16 PM