I've been a very bad Solar System Ambassador the last couple of years. Other parts of life (job, family, music) have intervened, and I just haven't been keeping up with space developments and doing outreach events. My bad. I haven't even fired up Orbiter in probably 9 months. But I'm still really interested in this whole business of exploring the solar system (see my recent review of Kim Stanley Robinson's new book 2312 - he really makes the solar system come alive, 300 years in the future).

But of course the solar system is alive now. Mostly here on earth of course, but our latest robotic emissary to a neighboring planet is going to land there in less than four hours from now. That is of course NASA's Mars Science Laboratory (MSL), otherwise known as Curiosity. Today I have been reviewing the mission and the all important EDL (entry, descent, landing) phase, the famous "7 minutes of terror" that will start in just about three and half hours for us (Curiosity will experience it about 14 minutes before we hear about it, the time that light-speed radio signals from Mars will take to get here).

I have been watching the progress using JPL's very cool "Eyes on the Solar System" 3D visualization web application which includes a detailed simulation of the EDL phase. You can watch this as a preview (including controls to speed up, slow down, reverse, and pause the events) or you can watch it live. Right now the live view shows the cruise stage slowly spinning with its solar cells pointed to the sun: 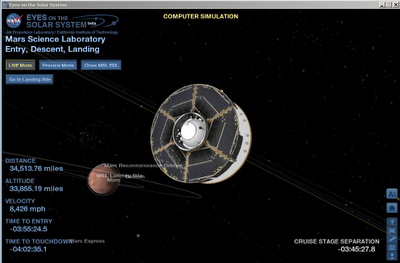 But if you run the preview mode (or wait for the landing), you can watch all the more terror-laden steps like aero-shield heating, descent stage separation, and the grand finale, the special-forces-like "sky crane" landing (there is also a very cool JPL video about the EDL phase here): 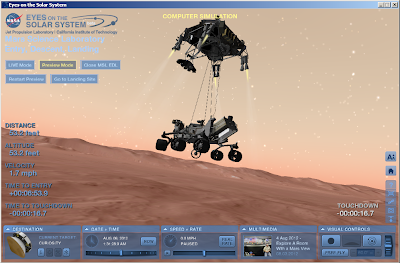 I wish the landing weren't happening at 1:30 am in my time zone, but I plan to try to stay up even though it's a "school night." I was lucky enough to see Curiosity when it was still a bunch of parts in the JPL clean room back in May 2009, and I feel a special attachment the the not-so-little six-wheeled fella (gal?) - here's a picture I took of the descent stage at JPL that day: 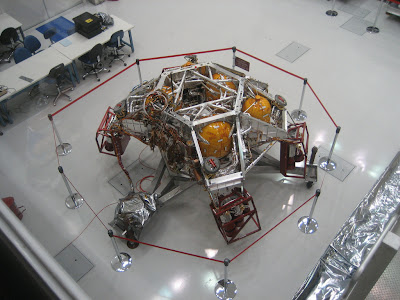 Posted by FlyingSinger at 10:02 PM