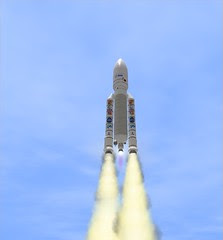 Andy McSorley and Mark Paton have been working steadily on the Orbiter models for our Mars for Less (MFL) virtual prototype. Most of the major components are complete and have been tested independently. On the Flickr pages, I've shown a number of shots of Andy's work with the Ariane-5 launch vehicle and his "Proteus" modular boosters, plus some of my tests with using tethers and small "droid" spacecraft to assist in (simulated) remote-control orbital assembly of these modules.

I've also shown a few examples in this blog of Mark's prototype MFL spacecraft, with which he has been doing Mars aerocapture and entry tests as well as modeling. We decided to "fatten up" the crew vehicles by assuming a larger launch fairing for the Ariane-5 (or other MLLV that might be used to launch these components). Mark is completing work on this now, so we will soon be able to perform "integration testing" and start capturing data, pictures, and video clips for the paper we will present at the Mars Society Conference in Washington, DC in August (Andy's picture above is a preview of the all-up Mars spacecraft with Francis Drake's CEV docked to deliver the crew). Once the paper is out of the way, we will clean up and document the whole lot and release it as an add-on for Orbiter users to play with. Note that we are making use of various other add-ons as part of these efforts - these will be referenced and credited in our paper and in the eventual release documentation.

The process of turning Grant Bonin's MarsDrive Mars for Less reference mission into a virtual prototype has been an iterative exercise through which Andy, Mark, Grant, and myself have learned a lot about spacecraft, launch vehicles, and Mars mission design. It has identified various design issues that we have been able to visualize and solve using Orbiter (it helps that both Andy and Mark are able and quick when it comes to 3D model building for Orbiter). This is really the point of our paper - that Orbiter is a fantastic, easy to use, and quite accurate tool for such virtual prototyping. It's also educational and fun (and it's free).
Posted by FlyingSinger at 10:07 AM