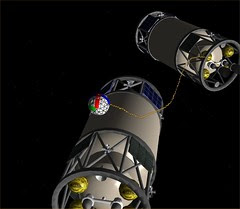 We have two possible uses for tethers in our Mars for Less project for Orbiter. One is to generate artificial gravity for the crew by spinning their spacecraft on a long (~1.5 km) tether connected to the spent final stage. The other possible use is in connecting the modules of the Mars-bound spacecraft in low Earth orbit. My idea here is that even if all the modules have thrusters (and some may not), using thrusters for final maneuvering could be tricky and possibly risky, especially if it is being done semi-autonomously (with remote control assistance from ground controllers). Tethers with electric spoolers could be used to slowly pull the modules together once they are roughly aligned and within (say) 100 meters. The Tether MFD add-on for Orbiter (by Matthew W) does an amazingly good job of simulating the tethers and the coupled behavior of the connected spacecraft (the motion can easily get away from you, and stopping it is not simply a matter of pressing the "kill rotation" button). I actually docked two nearly-aligned propulsion modules using only the tether force, no thrusters.

If there are no astronauts on the scene (though there might be for critical assemblies), how would the ends of the tethers be connected? One idea would be to use small, short-range, remote-controlled satellite "droids" to grab, extract, and connect the tethers to their attachment points once the spacecraft are close together. Several of these small robots could be used to provide multiple viewpoints (with on-board cameras and laser rangefinders) for the ground controllers doing the assembly. I used Chris Johnston's Aercam/Sprint add-on to simulate this in the picture above. More pix on Flickr.

N.B. I just noticed a new NASA article about tiny "droid" satellites to be tested on the ISS - it even mentions the idea of orbital assembly, but not tethers. One of three of the small test "droids" is already aboard the ISS (the red one - blue and yellow will come aboard with STS-121 whenever that flies).
Posted by FlyingSinger at 9:20 PM