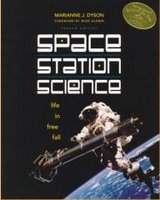 I’m not talking about an actual prep school for future astronauts. As far as I know there isn’t such a thing, although there is SPACE CAMP in Huntsville, Alabama, a commercial operation with programs for kids of various ages (also has adult programs). There are other space camps too, and I found a web site that has some astronaut selection tips and further references.

What I am talking about is specific things to read and do that could help you understand what space flight is really like and whether you might like to try it sometime. It probably won’t surprise you to know there’s a bit of science learning involved in this. There are lots of books about space and astronomy, and while I haven’t read all of them, I have four books (and one free computer program) that I would recommend as a “starter library” for really learning about space flight. Some of these books are nominally for kids, but I think most adults will find them very helpful and enjoyable.

Space Station Science ("Life in free fall," Second Edition, 2004) by Marianne Dyson. If you are interested in learning about the International Space Station (ISS) or about what life in space is really like, this 128 page book is for you. It covers “getting there” (crew training, launch, orbits), space basics (space station systems and operations), living in space (free fall, food, bathrooms, sleep), working in space (space suits, doing science in space, Earth observation), and coming home (back to Earth, the future). It has lots of great photos and illustrations and a number of hands-on activities to help make some of the concepts more clear (and fun). Although it’s aimed at ages 9-12, it is detailed, accurate, and well written, and I would recommend this book to anyone with an interest in space.

Kids to Space by Lonnie Jones Schorer (2006). I discussed this book in a recent blog post. It covers a wide range of space related subjects in Q&A form, with questions that came from thousands of U.S. and Canadian students, and answers from a wide variety of experts. It’s more of a reference book, but I found it to be quite “browsable” – pick a topic such as “breathing” and read through 26 questions and well written answers. There are around 94 topics in this excellent 304 page book (illustrated with kids' pictures of various space subjects).

To Rise From Earth by Wayne Lee (2000). I discussed this book in a January blog post. Sadly, it is out of print, but used copies are available through Amazon. Wayne Lee is a space flight planner for JPL (he worked on landing the Mars Rovers, among other things), and he does a great job explaining how spacecraft, orbits and trajectories work. He also covers the history of space flight. This is the best non-technical introduction to “orbital mechanics” that I know.

Go Play In Space (Second Edition, 2006, free e-book). OK, I wrote this (with Andy McSorley on the second edition). But it’s the only “hands on” introduction to space flight that I know. How can it be hands on? It uses the free PC space flight simulator Orbiter to teach you how to achieve and change orbits, fly to the Moon, dock with the ISS, and even fly to Mars. It has a lot of references and background information too, including a final epilog called “Your Future In Space.”

So there you have it – a four-book, one-simulator “astronaut prep school” you can own for around $50 or less. I would also strongly recommend Marianne Dyson’s book Home on the Moon (Living on a Space Frontier, National Geographic 2003) since astronauts will be heading back there in a few years, but this might be considered supplemental reading in a basic “prep school” library.

Posted by FlyingSinger at 11:51 AM