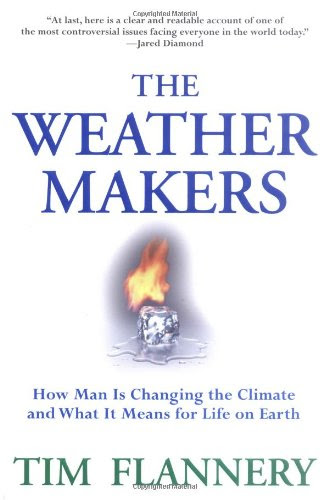 I've just finished reading a wonderful yet terrifying book on climate change, The Weather Makers by Tim Flannery. With vivid writing, numerous examples of changes that are already occurring, and extensive references to scientific and general sources, this book organizes the complex facts of climate change into clear explanations, and makes a compelling call for action. We are now the weather makers, and although some may argue that the amount of carbon that humans are introducing is still relatively small compared to all the natural processes of the atmosphere, oceans, forests, etc., all of these complex systems are in a sort of balance. And just as you wouldn't need to be especially strong to tip over a huge rock balancing on the edge of a cliff, climate is at or near such a tipping point, and human actions (and inaction) are on track to push us off that edge in the next few years if we don't make changes soon.

Others argue that claims of climate change are "political" and "controversial" and that we should wait for better proof. Sure Hurricane Katrina was terrible, but can anyone really prove that the strength and frequency of hurricanes are related to global warming and not due to other cyclic phenomena? This book makes the case the global warming is deeply involved (in an afterward added just after Katrina in late September 2005), but even if there's only a certain probability that this and other changes are due to human-induced climate change, we still ought to act. A prudent person buys a fire extinguisher before the stove catches on fire.

But it's hard to change, I know. I swear every day that I will eat less and exercise more, and I know I need to, but I usually don't. I'm prudent in many things but I let a lot of things slide. But climate change is not something we can let slide for much longer or problems like Katrina will become more common and devastating. Flannery also talks about all the changes that are less obvious but which may lead to snowballing side effects. Things like damage to coral reefs and forests, and the loss of thousands of species of animals and plants, most of them small, remote, and inconspicuous (in addition to the better known declines of large animals). Whether these lost animals and plants would have led to cures for cancer will never be known, but we do know that they are all components of complex ecosystems which help to keep things in balance in ways we hardly yet understand. Things like changes from old forest to scrubland or grassland that change the amount of water vapor in a region and result in less or more rain in other places. We just don't know how many of the huge rocks we are pushing on are balanced on the edge of a cliff, poised to fall on someone's house or head when we accidentally reach a tipping point we didn't know was there.

Flannery ends the book with things you can do right now. I know already that my next car will be a hybrid, which can reduce my personal transportation emissions substantially, even compared to the 1998 Camry I currently drive. I will look into solar water heating and remind my daughter (a member of the environment club at school) that leaving lights and appliances on around the house is contributing CO2 to the atmosphere, as well as annoying me! Maybe I should shut down the PC in the basement when I'm not using it (um, most of the week - oops).

The point is, I can do something now, and so can you. I'd suggest reading this book as a start, or you might read Plan B 2.0 by Lester R. Brown, another excellent recent work on climate change and what we can do about it, available in book form and also as free PDF chapters. Be the change!
Posted by FlyingSinger at 4:31 PM

Bruce,
Thanks for the book recommendation and the review! It is my fervent wish that people who dismiss human-induced global warming as "political" would read books like this with an open mind.

As far as personal action is concerned, you might want to visit Terrapass.com. For a relatively small price (i.e. a couple hundred bucks) they will offset your auto, home, and flight CO2 emissions for a year by investing in renewable clean energy sources as well as directly purchasing carbon credits from carbon exchanges. I bought an auto and a flight Terrapass from them and I'm thinking of buying a home one as well because it's a lot cheaper than the green energy I currently pay an arm and a leg for.