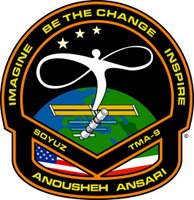 I haven't gotten too excited about previous $20 million-a-ticket space tourists (even though Greg Olsen was somewhat involved with optics, as I am). I'm not even sure if the three previous private space travelers had web sites or blogs (I suppose they at least had web sites). But I'm a bit more psyched about Anousheh Ansari's Soyuz flight to the International Space Station coming in a few days (planned for September 18). Ansari will be the first woman to fly as a "space tourist," as well as the first Iranian-born astronaut. She is also publicizing her flight in part as an educational outreach activity (her web site describes her as the "First Female Private Space Explorer & Space Ambassador"), and in recent days she has started a blog which she intends to continue through her flight to the ISS, sharing her experiences with the world.

Her blog is even open for visitor comments, some of which she (or someone) has responded to. The blog has some interesting posts, discussing among other things "the price of a dream," along with a guest entry by X-Prize Foundation chairman and founder Peter Diamandis on the importance of space. The blog also shows the mission patch that she will wear (pictured), which I rather like, especially the "Imagine - Be the Change - Inspire" part. Because of the current international tensions over Iran's nuclear plans, there is some controversy about the Iranian colors (and her plan to also wear some version of the Iranian flag as a patch, along with an American flag), but why shouldn't she honor her heritage?

Some may say that this sort of thing is ego-tripping of the (literally) highest level by another member of the super-rich, but I give Ms Ansari full credit for living her dream of going to space while doing her best to share her experience and to use it to inspire others (she and her family also sponsored the initial X-Prize that was won by SpaceShipOne in 2004, so they seem to take the inspiration business pretty seriously). Best of luck to her. I hope to follow in her footsteps as soon as the tickets become a few orders of magnitude cheaper!
Posted by FlyingSinger at 9:34 PM

I just found your site, but thought you might be interested in my posts (1, 2) about her flight on my blog AeroGo.