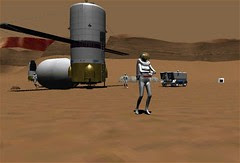 Astroprof wrote an interesting post the other day called "Mars Mission: The Human Factor." I started to respond on his blog, but I realized that my comments were getting pretty long, so I decided to turn it into a blog post here. Please read Astroprof's post first for context. I have a few related comments, noting that none of this refutes the basically correct notion that many human factors as well as technical issues could be show stoppers on a multi-year Mars mission.

1. Analogs? I agree that Earth based analog missions do have a lot to teach us, and longer duration ones need to be done (with or without alcohol). There are also a lot of people thinking about the problems of long duration missions and human factors - for example, there were many papers related to this that I unfortunately could not attend at ISDC in Dallas. Of course thinking and planning and even simulation don't replace real experience, and the convenience and safety of staying on Earth for the tests makes them less authentic - life support system failure most likely won't kill the crew at an analog site in Russia.

2. SF Writers - SF doesn't replace experience either, but there have been a lot of good ideas explored in Mars novels, such as Benford's The Martian Race (based on Mars Direct) and Robinson's Red Mars (though it starts with the second generation colony ship for the "first 100" settlers, and that thing is huge). Another one that gets very detailed in the systems area of a Mars Direct style mission is Shadows of Medusa by Brian Enke, which offers an interesting solution to crew relationship problems.

3. Inflatable crew space? NASA signed the inflatable trans-hab over to Bigelow for space station development, but this could be licensed back if it works out - this still would not be a Battlestar Galactica-size spacecraft, but it could give a substantial increase in volume for living space for relatively small mass and launch size penalties.

4. Orbital assembly? Zubrin doesn't like orbital assembly very much, but some have proposed variations on Mars Direct using medium launch vehicles (like Ariane-5, Delta IV Heavy, possibly others) and orbital assembly. I worked on an Orbiter simulation of this with Andy McSorley, Mark Paton, and Grant Bonin in a version called Mars for Less (MFL), first designed and published by Grant. I gave the paper at Mars Society in DC August 2006 (see this page for more details and my various MFL blog posts). Our HAB and ERV were smaller than Zubrin's (so they would be even MORE cramped), but this was just a concept thing, and using the transhab idea or linking together additional hab and boost modules could help (orbital assembly should be more scaleable, especially if the modules are designed to assemble by docking with minimal astronaut EVA's needed).

5. Reliability? Long term reliability of critical systems is a big, big question. One of the NASA astronauts who spoke at ISDC talked about the importance and fragility of the toilet system on the ISS. It would often have problems requiring service, and this would become job #1 until it was fixed. Toilets and other parts of life support have to work better than what we have now for 2+ year Mars missions with limited spare parts and backups, and with the life support system being closed (full recycling or very close to it, which has not really been achieved). ISS experience is a valuable start, but if things get too crappy up there (sorry), they can escape in a waiting Soyuz spacecraft on fairly short notice. This is clearly not an option for a Mars-bound crew.

6. Pseudo G by Spinning? Then there's pseudo-G (spin the spacecraft on a tether) which someone should really test out in Earth orbit sometime. Six or more months in zero G could be depressing.

If getting humans on Mars becomes a top priority for the world (or just for a group with enough money and resources), these problems could certainly be worked out, though if I were on the mission, I'd want to know that the critical life support systems had been tested under realistic space conditions for at least two years if that would be the needed lifetime for mission success (pre-landed backups should be available once you reach Mars). It would take time and effort but I believe it still could happen in 15 or so years, though it is unlikely to be the US government's top priority for a while, so it might have to be some other group of countries and/or commercial entities.
Posted by FlyingSinger at 6:16 PM