The STS-117 and ISS crews got some important things squared away today - EVA astronaut Danny Olivas repaired a gap in a thermal blanket with the help of a medical stapler, while cosmonauts were able to get the troublesome Russian ISS control computers back up and running. Let's hear it for Yankee and Russian ingenuity! Plus a few engineers on the ground working overtime I'm sure. This picture is not from today's spacewalk - it's just one I found in the day 4 gallery and especially liked.

I also liked the book Reflections from Earth Orbit by Winston Scott. Scott, whom I met briefly last weekend at Space Expo 2007, has written a truly down-to-Earth astronaut memoir. It's relatively brief (128 pages) and includes anecdotes about growing up in Miami in the 1950's (attending segregated schools until tenth grade), his experience as a young and talented trumpet player, and his transition from a Florida State music graduate to a US Navy pilot (starting in helicopters and ending up in the F-14 Tomcat!). Of course he also describes many details of his two space shuttle flights (STS-72 in 1996 and STS-87 in 1997). 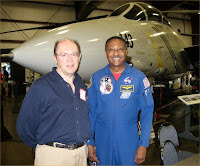 Scott relates it all with modesty and with respect for the non-technical reader who is simply curious about what space is like. I really enjoyed this little book - it might be just the thing to inspire a young reader or engage a person without a huge interest in "space stuff." It has a lot of old-fashioned human interest and the feel of a conversation with a friendly guy who just happens to have been a fighter pilot and an astronaut, and who can also blow a mean trumpet. Scott also reveals what he believes to be the true soundtrack of outer space: In A Silent Way by Miles Davis. I'll have to check it out.
Posted by FlyingSinger at 8:56 PM