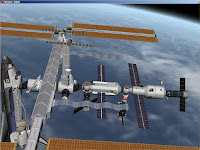 The STS-117 mission is continuing on overtime, although they are winding down and have been pronounced ready for reentry and landing following the repair of the thermal blankets on the OMS engine pod. A fourth EVA was also done today, to complete ISS work that was started Friday. I’ve been traveling and didn’t get to see much of the mission, but they seem to have done a great job overcoming various problems.

An interesting thing happens during shuttle missions down here in the Orbiter simulator world. Actually it doesn’t just happen – it requires a lot of work by Dave Hopkins (one of the main developers of the amazing “Shuttle Fleet” add-on series for Orbiter, Dave413 on Orbiter Forums and at Orbithangar). Dave puts together updated shuttle and ISS add-ons, scenarios, instructions, etc. to allow Orbiter users to re-create key events of the actual shuttle missions, sometimes even in real time (he often updates scenarios to use actual times and orbital elements from the real mission as it progresses). 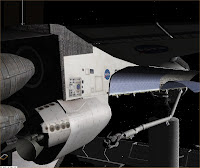 As an example, on June 14th he posted a scenario for the OMS thermal blanket repair which took place on the June 15. This did not include the actual thermal blanket defect and repair (it’s not quite that detailed), but it does show how astronaut Danny Olivas was positioned on the robot arm for the repair, giving insight into the geometry (it’s also cool to view the entire ISS complex in 3D,with the Atlantis docked there). Other scenarios include various pre-docking states and robot arm (RMS) checkout (the SRMS system is more detailed in the shuttle fleet than in the default Atlantis and includes a sequence editor and an arm camera view, shown in the yellow outlined inset here - this inset view was done graphically, not in Orbiter).

Thanks to Dave for putting together these great add-ons as well as the data, instructions, and scenarios needed to make use of them for particular missions as they occur. Note that you need to follow instructions carefully as to which add-ons to install. The STS-117 scenarios require the patched 3.9.3 shuttle fleet, the expansion pack, the 1.0 version of the ISS (not the same as the default ISS in Orbiter), the STS-117 scenarios pack, and the new OMS repair scenario. These are all available for free download on Orbithangar. For best results, read the excellent included documentation for these detailed add-ons.
Posted by FlyingSinger at 6:03 PM

Could you give me some info. on where i can get these add-ons and which is the latest version? I had trouble finding them.