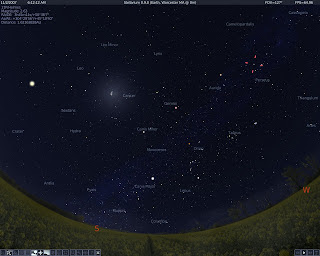 I was out very early this morning and was treated to a dark and totally clear sky at 6:10 am, though I didn't have much time to enjoy it. Venus was bright and high in the east, the Moon and Mars were almost overhead, Orion was clear and bright, and comet 17P/Holmes was clearly visible (here's a recent telescope shot showing the comet's tail, which is extremely short because the comet is heading almost directly away from us). This Stellarium shot doesn't do it justice but it shows what was up.

Just before 8 am I went for a 40 minute walk in the office park woods while listening to an amazing recording of classical guitarist Kazuhito Yamashita performing his arrangement of Mussorgsky's Pictures at an Exhibition. This colorful work is a favorite classical piece of mine in its Ravel-orchestrated version, and it's just crazy the range of tones and rhythmic effects that Yamashita coaxes from a single classical guitar. An incredible tour de force. With the sunlight filtering through the colorful leaves, it was quite a cosmic experience. There is a god, and it is called iPod!
Posted by FlyingSinger at 1:49 PM

Hello!
Joy and prosperity to you!
www.vladsmusic.blogspot.com

...because the comet is heading almost directly away from us

Good point Ed - the orientation of the comet's tail has nothing to do with us per se, but it happens to be oriented as you describe. Thanks.