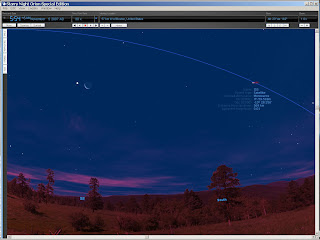 Tomorrow (Monday 11/5) morning between 5:52 and 5:58 am, the ISS and the undocked Discovery will make a nice, high-elevation pass from the southwest to the southeast at my location. With sunrise at 6:25 am, it should still be dark enough to see them, and the Moon and a few planets will be up at the same time (Mars, Venus, Mercury, Saturn). Unfortunately the forecast is for mostly cloudy, but I'll still get up early and hope for a break in the clouds. That was how I saw the ISS and STS-118 in August, the night before Endeavour landed. It was an mid-evening pass and there were a few lucky breaks in the clouds (the next evening I saw a very close ISS pass with clear skies).

The picture is not from Stellarium, but from "Starry Night Special Orion Edition," a commercial astronomy program that came with my new toy, I mean educational aid, the nicely portable Orion StarBlast "mini-dobs" reflecting telescope (more on that when I get a break in the clouds and can try it out). Starry Night is similar to the free Stellarium, but does offer some useful additional features, one of which is a web-based facility for automatically getting updated satellite information and displaying it along with all the usual planetary and star information. That's where this ISS display came from, though I did also check the time with NASA's SkyWatch site.

Update: I saw them! The clouds cooperated, opening a huge swath of sky. The ISS was bright and distinctly non-symmetric in shape as it passed just to the south of overhead, 424 km away at its closest point - it looked like it had a small appendage, which may have been Discovery, though it was only about 100 meters from the ISS at the time (I should have grabbed the binoculars). The Moon and Venus were beautiful and I was able to see Mars, Sirius and possibly Saturn. Cool!
Posted by FlyingSinger at 9:33 PM

hi! i like this post because i'm a "fan" of shuttle and iss missions too! i'm looking for a software that simulates the passage of these orbiters and i saw your picture from starry night. does this software let you see that?
if you want you can answer me here: faida@europe.com
thanks!