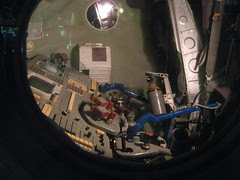 I'm staying tonight in a hotel near Charles de Gaulle airport in Paris, the start of a week of business visits around France and Spain. It was raining this afternoon, but I decided to pay a quick visit to the Musée de l’Air et de l’Espace (web site seems to be in French only, but here's a brief English description), the French air and space museum at Le Bourget airport. I've been to the museum before and also attended the Paris Air Show at Le Bourget a few years ago, but this time I mainly wanted to revisit the space exhibits in light of my recent space flight simulation and astronomy obsessions, and to get a close look at the full-scale mockup of the Ariane 5 launcher that I have launched many times in Orbiter simulations. It's big, and today it was wet, as was I.

I have to say that the aircraft collections (especially WWI) are a lot better. The space stuff is nicely presented, but it's not exactly exciting or up to date. Most of the spacecraft on display are mock-ups of Soviet-era Russian spacecraft, mostly from the 1960's, though there are some good exhibits on the Ariane launchers, including a full-size payload shroud with a mock-up of the SPOT 1 Earth monitoring satellite.

While some of the Russian spacecraft mock-ups are cool looking or have interesting histories, the only real hardware I found was the Soyuz T6 reentry capsule. This was used in 1982 to return two Soviet and one French cosmonaut to Earth after a 2-week mission to the early Salyut 7 space station. It is really ridiculously small inside, especially for three people. When I first visited years ago, the actual Apollo 13 command module Odyssey was also here, but now it is on permanent display at the Kansas Cosmosphere and Space Center (which looks like an amazing space collection for a future trip). More pix on Flickr.
Posted by FlyingSinger at 3:37 PM