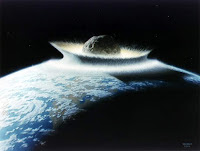 ...if an asteroid sneaks up on us and hits the Earth. At least they are trying to keep an eye on the neighborhood with a new microsatellite that's in development for launch in 2010.

The 65 kg NEOSSat (Near Earth Object Surveillance Satellite) will have a telescope with a very small (15 cm) primary mirror, but because it will be above the atmosphere, this small mirror will collect enough light to detect and track small NEO's and satellites. And as explained in the mission background notes, its design will allow it to orient itself very quickly and precisely and to take very quick exposures, using technology originally deployed to measure microvariability and oscillation of stars. A sunshade will allow it to look to within 45 degrees of the sun, a region that's almost impossible to observe from Earth's surface. Pretty amazing for a $12 million mission.

Thanks Canada! And thanks to Centauri Dreams for the tip.
Posted by FlyingSinger at 11:42 AM