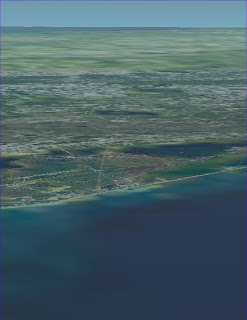 Sometimes I feel compelled to do silly things when I should be sleeping or something (I'm still in Europe and it's well past midnight here). Case in point: tonight I saw this "shuttle launch from space" post on astropixie's blog. Really cool pictures of a shuttle launch from some high altitude location (possibly the ISS, probably a NASA observation plane). The silly part was deciding to try to simulate it in Orbiter.

My observation plane was an Orbiter-standard "Deltaglider" (the real chase plane probably wasn't red and nuclear rocket powered). I ended up flying at 16,000 meters (about 52,000 feet), some 148 km southeast of the launch complex when I took my simulated pictures of the simulated launch of STS-115 on September 6, 2006 at 15:14:55 UTC. 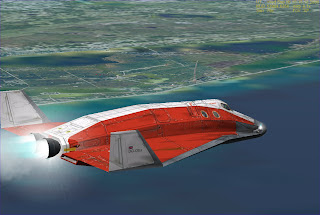 The geometry looks plausible to me, and I think the real photos are probably from an observation or weather plane, not from the ISS. I don't have the orbital position data for the ISS at the time of launch, though I suppose this would be fairly easy to find on the web (Orbiter has the ISS but its orbit data doesn't closely match the often-adjusted real ISS orbit unless you put in recent state vector data from NASA). But I really need to get some sleep.
Posted by FlyingSinger at 6:26 PM

glad the source of the photos is all worked out now!

yeah, i'm officially a doctor now! yippee! thanks for the support!